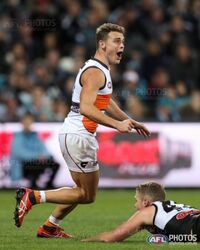 A late starter at WAFL level, having given up an electrical apprenticeship in his hometown to move to Perth as a 20-year-old,[1] Langdon was drafted by GWS after two successful seasons with Claremont. He played 21 games in his first season with the Giants, but just ten over the next two years.

Langdon was traded to West Coast at the end of the 2020 season for a third-round draft pick.

Retrieved from "https://eaglepedia.fandom.com/wiki/Zac_Langdon?oldid=35289"
Community content is available under CC-BY-SA unless otherwise noted.