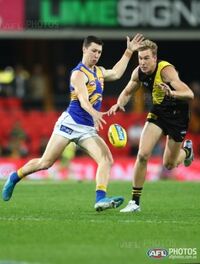 Victorian midfielder Xavier O'Neill was a surprise first selection by the Eagles in the 2018 draft.

Having played TAC Cup for the Oakleigh Chargers but missed selection for Vic Metro,[1] O'Neill was a draft bolter after winning the kicking test at the draft combine. On being drafted, he was described as a speedy midfielder who could win a good balance of contested and uncontested possessions.

O'Neill began slowly in the Eagles' reserves, but built some strong form by the end of the 2019 season including a 24-possession game in the club's first finals win over West Perth. He eventually broke into the side late in the pandemic-shortened 2020 season, playing five games in a 19-day period during the club's second Queensland hub stay.

Retrieved from "https://eaglepedia.fandom.com/wiki/Xavier_O%27Neill?oldid=34370"
Community content is available under CC-BY-SA unless otherwise noted.