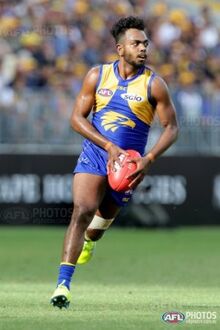 Territorian Willie Rioli, one of the famous Rioli footballing clan, was West Coast's third pick in the 2016 national draft.

A cousin of Hawthorn star Cyril Rioli and nephew of the great Maurice Rioli, Willie Rioli junior moved from Darwin to South Fremantle as an 18-year-old in an attempt to get drafted. His father, Willie senior, had played senior football for the Bulldogs along with his brothers Maurice, Cyril and Sebastian, and had himself been drafted by Hawthorn in 1990, although he did not play a senior game for the Hawks.

Willie junior went undrafted and returned to Darwin where he played back at St Mary's. He shifted to Adelaide to play for Glenelg in 2015,[1] dropping a massive 16 kilograms and impressing as a defensive small forward. Rioli kicked 23 goals in 16 games in 2016, as well as a bag of four for the SANFL representative side against Victoria.

Rioli looked set for an early debut before suffering a hamstring injury in training, and then re-injuring the tendon in his first senior WAFL game. He returned late in the season and showed promise at East Perth but was overlooked for AFL duties.

Despite a limited pre-season in 2018, Rioli was quickly brought into the senior side in Round 2 and immediately impressed as a silky small forward with the ability to push up into the midfield. He played every game from that point on, and joined cousins Cyril and Daniel (Richmond) in becoming a premiership player, additionally being awarded the club's Emerging Talent gong.

Looking to build on that in 2019, Rioli suffered a foot injury on the eve of the season that kept him out of action for two months. He returned to kick 18 goals from 14 games before receiving a provisional suspension from the national anti-drug agency for allegedly tampering with his urine sample during a routine test, ruling him out of the semi-final against Essendon and putting his career in jeopardy.

Retrieved from "https://eaglepedia.fandom.com/wiki/Willie_Rioli?oldid=33550"
Community content is available under CC-BY-SA unless otherwise noted.