Start a Wiki
Will Sullivan 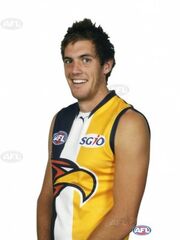 A project ruckman from Victoria, Will Sullivan's long-term prospects at West Coast took a dive when Nic Naitanui arrived at the club 12 months into his AFL career.

Allocated to Perth, Sullivan showed enough positive signs in his first two seasons to be offered a third year on the rookie list when the rules were changed at the end of 2009.

Unfortunately he was still unable to earn a call-up, and was not offered a senior spot after the 2010 season.

Sullivan returned to his hometown, signing with Werribee in the VFL.[1] He joined the Western Bulldogs' VFL team Footscray in 2014.[2] Sullivan appeared for local side Werrribee Districts in 2018.[3]

Retrieved from "https://eaglepedia.fandom.com/wiki/Will_Sullivan?oldid=25755"
Community content is available under CC-BY-SA unless otherwise noted.