Start a Wiki
Will Schofield 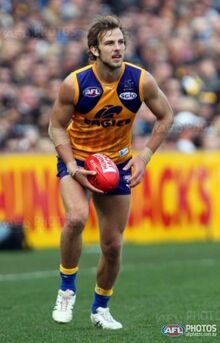 Tall, athletic defender Will Schofield has become a popular member of the side after being drafted from the Geelong Falcons.

A tall, athletic defender, Schofield plyed his junior football with Geelong Falcons and Vic Country before being drafted by West Coast in the 2006 draft. Allocated to Peel Thunder, Schofield was called up for a surprise debut late in his rookie season and played three games for the year.

Schofield added another nine games in 2008. He broke into the side for a run of games mid-season before being sent back to Peel, and was recalled for the final round game in his hometown Geelong.

He went backwards in 2009, playing just three senior games and spending the majority of the year with the Thunder. Despite that, he was given a new contract and subsequently cemented himself in the side in 2010. After being an emergency for the first two rounds, Schofield came into the side in round 3 and seized the opportunity to showcase his running ability, racking up 22 possessions against the Roos. He played every game from that point on, although his fortunes were mixed, with one lowlight coming against Richmond when Jack Riewoldt took Schofield and Eric MacKenzie to the cleaners to the tune of 10 goals.

With Beau Wilkes and Matt Spangher departing at the end of the year, Schofield found himself in a three-way battle with fellow 2006 draftees MacKenzie and Mitch Brown for places alongside Darren Glass in the backline. Despite the competition Schofield, who was gradually becoming a cult figure with his distinctive beard and willingness to take the game on, was generally in the senior side throughout the club's successful 2011 and 2012 seasons. That continued early in 2013 until Schofield broke a finger in the last-second win over North Melbourne. After recovering he was forced to make his way back through the WAFL (at a new club, East Perth), but eventually earned a recall and played another nine games before suffering a fractured cheekbone in a random street attack in Geelong that forced him to miss the final round.

2014 was a below-par year for the popular defender, who started the year at East Perth and took time to cement his spot under new coach Adam Simpson. His runs out of the backline were less prominent than previous seasons and he failed to impact the scoreboard. Nevertheless, the retirement of Glass mid-season meant that his place in the best 22 was now virtually assured and he finished the year with 17 games, bringing up his 100th appearance against the Hawks in Tasmania.

Schofield had an interrupted pre-season in 2015 and then was thrown in the deep end thanks to season-ending injuries to MacKenzie and Brown. In the absence of the team's two most highly-rated stoppers, Schofield took the opposition's best forward most weeks and to his credit was rarely beaten.

Even with MacKenzie's return in 2016, Schofield continued to regularly line up on the opposition's main target. Despite his form not reaching that of 2015, he played all but one game and earned life membership after bringing up his 150th. Unfortunately for Schofield, he dropped down the pecking order in 2017 as MacKenzie returned to form, and played just 10 games. He hit the headlines in the second half of the year when he was reported for throwing an elbow in a half-time scuffle that grazed the chin of Demon Clayton Oliver who promptly hit the deck, with the Eagle ultimately escaping the charge at the Tribunal amid claims that Oliver had accentuated the contact.

Schofield found himself stuck at East Perth for the first half of 2018, playing just two AFL games before the midseason bye as the match committee preferred a smaller defence based around Jeremy McGovern and Tom Barrass. He worked his way into the side in the second half of the year, was squeezed out for the first final but recalled when Brad Sheppard tore a hamstring, and turned in one of his best games in the Grand Final.

Affected by a serious cork suffered during the pre-season, the wily veteran found himself squeezed out of the backline again at times during 2019, but was recalled before the finals to provide assistance to Barrass, and finished with 14 games.

Retrieved from "https://eaglepedia.fandom.com/wiki/Will_Schofield?oldid=32915"
Community content is available under CC-BY-SA unless otherwise noted.