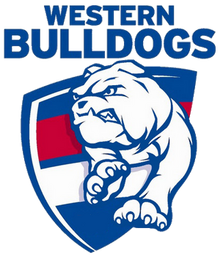 The Western Bulldogs entered the VFL as Footscray in 1925, having won nine premierships in 28 years in the Victorian Football Association. Their first VFL/AFL premiership came in 1954, followed by a lengthy premiership drought until a fairytale flag in 2016. They changed their name to "Western Bulldogs" ahead of the 1997 season.

Biggest loss: 70 points in the 1998 qualifying final at the MCG

Retrieved from "https://eaglepedia.fandom.com/wiki/Western_Bulldogs?oldid=29961"
Community content is available under CC-BY-SA unless otherwise noted.