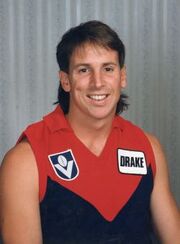 Subiaco product Warren Dean played 32 games for Melbourne before returning to Perth, but could not manage a senior game for the Eagles.

Forward-wingman Dean joined Melbourne as West Coast were being formed, playing 19 games for the Demons in 1987 including kicking three goals in an elimination final. He added just 13 games in the next two seasons as he was hampered by a knee injury.

After leaving the Demons at the end of 1989 Dean was picked up by West Coast in the pre-season draft, but only managed one WAFL game due to injury.

Dean moved to Dunsborough and ran a roadhouse.[1] In 2018, his son Lucas received a football scholarship to the University of Texas San Antonio as a punter.[2]

Retrieved from "https://eaglepedia.fandom.com/wiki/Warren_Dean?oldid=28234"
Community content is available under CC-BY-SA unless otherwise noted.