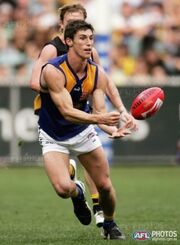 Subiaco product Tyson Stenglein spent six years with the Crows before returning home to become an important part of the Eagles' premiership midfield.

Stenglein was drafted by the reigning premiers in the second round of the 1998 draft. He played 106 games for Adelaide across six seasons, becoming one of the league's best defensive midfielders. At the end of 2004 he announced his intention to come back to WA, and eventually became an Eagle in return for the side's first and second round picks.

Stenglein made his debut in round 1 against his old side and played 22 games for the season, generally taking a tagging role on a star opposition midfielder. He finished sixth in the Club Champion award in his first season as an Eagle.

He followed that up the following season by playing every game and winning fourth place in the best and fairest, as well as a premiership medal. Generally noted for his stopping ability, his most memorable game may have been the famous comeback match in Geelong where he kicked a career-high three goals.

Stenglein continued to be a consistent contributor in 2007 and 2008, missing just a handful of games and finishing in the top 10 of the Club Champion award both years.

In 2009, with West Coast struggling on the field and looking to rebuild, the veteran found himself on the outer. He played just 11 games for the season and none at all after round 15, and suited up for Subiaco for the first time in a decade for their (unsuccessful) run to the WAFL grand final.

He announced a surprise retirement at the end of 2009, at the Club Champion awards night.

Stenglein moved to Victoria after his playing days ended, starting a web design and photography business with his sister and brother-in-law in South Melbourne.[1]

Retrieved from "https://eaglepedia.fandom.com/wiki/Tyson_Stenglein?oldid=25800"
Community content is available under CC-BY-SA unless otherwise noted.