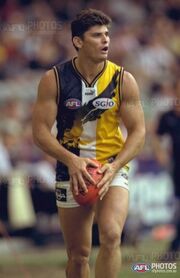 A cult figure during his all-too-brief time at West Coast, Wilson was an extremely late starter in AFL ranks after being drafted at the ripe old age of 28.

Wilson’s WAFL career had also suffered a delayed start. He was 24 by the time he made his debut with West Perth. Having crossed to the Royals for the 2000 season, he was surprisingly picked up at the end of the season to provide an alternative to a fading Scott Cummings.

Not overly tall for a key forward but extremely physically imposing, Wilson was a formidable presence for opposition defenders to contend with due to his ability to crash the pack. If he didn’t take the mark it was a fair bet that he’d at least take out an opponent or three.

Having taken his time to break into the big league, Wilson took little time in making his mark. In just his third game, he took 15 marks and kicked 7 goals against St Kilda and received 3 Brownlow votes.

Wilson finished his debut season with 40 goals, winning the club’s goalkicking. He started 2002 in even better form, kicking 6, 5 and 4 in the first three rounds to be on Coleman Medal pace, before his season was interrupted by injury. Despite managing just 14 games, he kicked 38 goals for the year to finish just 8 goals short of Phil Matera for the club goalkicking.

By the time the 2003 season started Wilson was 31 years old and he struggled for selection. He played just 5 games for the year and was delisted at the end of the season.

Wilson returned to East Perth where he overcame a bout of chronic fatigue to win the Bernie Naylor Medal as the WAFL’s leading goalkicker in 2006.

Following his other love, motorsport, Wilson began driving sprintcars as well as competing in the Targa West rally.

Retrieved from "https://eaglepedia.fandom.com/wiki/Troy_Wilson?oldid=28009"
Community content is available under CC-BY-SA unless otherwise noted.