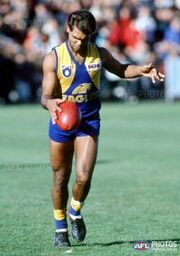 Hailing from the Carey Park club in Bunbury, the mercurial Ugle was recruited to West Coast by his Swan Districts coach John Todd when Toddy took the reins from Ron Alexander in 1988.

Remembered mostly as a small forward, Ugle had 15 touches and a goal on debut against the Bombers at the WACA. He was in and out of the side in his rookie season, and finished with 8 games to his name.

Ugle played in the opening round of the ’89 season, but then wasn’t seen again at VFL level for several months. Recalled for a late-season game against Footscray, Ugle made the most of his opportunity, kicking 3 goals from 16 touches. He followed that effort with 22 disposals the following week against Richmond.

That good form carried into 1990, Ugle’s best season with the club. Ugle was judged best on ground in the round 1 win over Collingwood, and put in a remarkable performance later in the season against St Kilda, kicking 6 goals after being switched from defence (where he’d copped a pantsing from Craig Davenport) after quarter time as West Coast charged to victory from a 7-goal quarter-time deficit. Ugle finished the 1990 season with 24 goals from 18 games.

That was unfortunately the highest point of Ugle’s career. He managed just one senior game (against Fitzroy) the following year, although he did manage to set a personal-high tally of 25 touches in that one match. 1992 was only slightly better, Ugle kicking 7 goals in a fortnight-long purple-patch but playing just 6 games for the year.

After struggling through 1993 and being selected just 4 times, Ugle failed to play a game in 1994 and was delisted at the end of the season.

Ugle returned to Swan Districts where he won back-to-back-to-back goalkicking awards and was made a life member in 1999. Recently he has coached the South Hedland Swans in the North Pilbara League.

Retrieved from "https://eaglepedia.fandom.com/wiki/Troy_Ugle?oldid=28450"
Community content is available under CC-BY-SA unless otherwise noted.