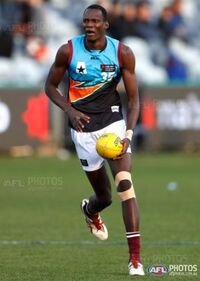 Athletic Sudanese-born ruckman Tony Olango was West Coast's second pick in the 2018 rookie draft, but spent just one year at the club.

Likened to Nic Naitanui, Olango was originally a soccer prodigy who trialled with Glasgow Rangers before turning to Australian Rules football and starring for the NT Thunder in the NEAFL.[1] Signed by Hawthorn as part of their Northern Territory academy, Olango played one reserves match for the Hawks' VFL affiliate Box Hill but was overlooked by Hawthorn in the rookie draft and West Coast pounced.

Olango had a subdued start to his AFL career, spending time in East Perth's reserves side. He was called up to the senior side twice, but suffered hamstring injuries both times. His rookie season was further impeded by the revelation that he was facing assault charges in Darwin from an incident that occurred the night before he was drafted.[2] He was delisted at the end of the year.

Olango remained with East Perth, signing on for two years.[3]

Retrieved from "https://eaglepedia.fandom.com/wiki/Tony_Olango?oldid=29004"
Community content is available under CC-BY-SA unless otherwise noted.