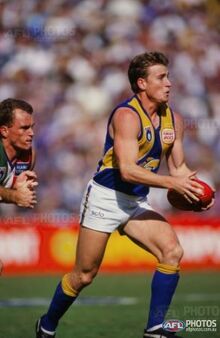 The popular Tony Evans built a reputation as a big-game player during his successful West Coast career.

Evans arrived at the club in the 1989 after a three-goal effort in Claremont’s 1989 grand final win. The nuggetty forward pocket slash rover spent his first season in the WAFL, again featuring in the Tigers’ grand final (although this time they went down to Swan Districts). He was handed his senior debut in the opening round of 1991 but played just that game and the following game against Collingwood that year, although he did win a second WAFL premiership in September.

1992 was Evans’ breakout year. Called up to the seniors in round 9, he kicked six goals in his first three games to cement his spot in the side for the rest of the year. Performances like his 23-disposal, 2-goal game against Fitzroy and a 28-possession showing in the final round against Carlton didn’t hurt either. Evans held his spot for the Grand Final and was one of West Coast’s best on the day, kicking 3 goals.

Evans had a similarly productive 1993 season, kicking 16 goals from 19 games and once again saving his best for the big games, putting in two of his better performances for the year in the elimination final and semi-final. His fearless style of play, throwing himself into the contest with no regard for his own wellbeing, won Evans plenty of fans but regularly resulted in him missing matches through injury. In 1994 he missed a couple of lengthy stretches, but was back and healthy for the finals and again kicked 3 goals to help beat Geelong.

After his 1995 season was also interrupted by injury, Evo had probably his best season in 1996. He played all but 2 games and kicked 17 goals, and hit a purple patch midyear when he averaged 21 touches and 2 goals across a five-game stretch. Despite the lack of plaudits he had received to that point, his overall importance to the club was recognised at the end of the year with selection in a forward pocket in the Team of the Decade, a top 10 finish in the Club Champion Award (the only one for his career) and being presented the Best Clubman Award.

Unfortunately his 1997 season was a return to the injury-hit days of seasons past, although he was able to put in another characteristically outstanding finals performance in the loss to North Melbourne that year.

In 1998 it all ended rather quickly for Evans. After injuries held him to five senior games and 5 WAFL games, he realised his body would no longer hold up and announced his retirement in July, a victim of his own uncompromising approach to footy.

Evans is still involved at the club where it all started, Claremont, where he holds the title of Chairman of Football Affairs.

Despite only playing 108 games in the blue and gold, Evans’ impact on the club was further recognised in 2006 when he was named in the forward pocket in Team 20.

Retrieved from "https://eaglepedia.fandom.com/wiki/Tony_Evans?oldid=28656"
Community content is available under CC-BY-SA unless otherwise noted.