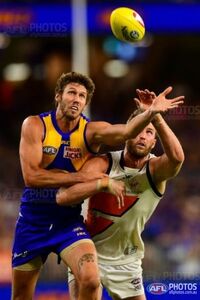 An inaugural Gold Coast squad member, Hickey played 12 games in two seasons for the Suns before shifting to St Kilda. He spent six years at the Saints, playing 67 games, but was unable to lock down the number 1 ruck role in his last two years there.

With Nic Naitanui undergoing a knee reconstruction in the second half of 2018 and Lycett shifting to Port Adelaide as a free agent following the premiership win, West Coast were in desperate need of support for Nathan Vardy and traded for Hickey. He started the year partnering Vardy, but spent much of the season shouldering the bulk of the load with backup from a pinch-hitting Oscar Allen.

Retrieved from "https://eaglepedia.fandom.com/wiki/Tom_Hickey?oldid=32722"
Community content is available under CC-BY-SA unless otherwise noted.