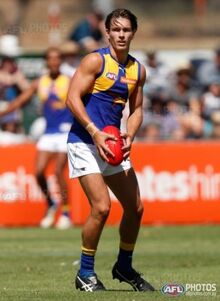 Originally from Kojonup in the South-West, Gorter played reserves for East Perth in 2015. He made his senior debut midway through 2016 and impressed as an undersized key defender, so much so that he was added to West Coast's rookie list at the end of the year.

Although he never pressed for senior selection, Gorter was a mainstay in defence for the Royals throughout the 2017 season, often matching up on bigger opponents depending on which senior Eagles were available. Despite that, he was delisted at the end of the year.

Gorter remained with East Perth for the 2018 season.

Retrieved from "https://eaglepedia.fandom.com/wiki/Tom_Gorter?oldid=23736"
Community content is available under CC-BY-SA unless otherwise noted.