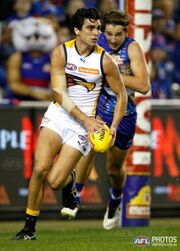 Medium defender Tom Cole was a member of the 2018 premiership side after being drafted from country Victoria in the 2015 national draft.

Hailing from Sandhurst, the junior club that produced the Selwood brothers, Cole represented Vic Country and played several VFL matches for Geelong before being drafted to West Coast. On being drafted, Cole was described as a classy medium defender/midfielder who was highly skilled by hand and foot and thrived in contested situations.

Cole immediately showed great promise on a half-back flank at East Perth, showing a willingness to run and take the game on, and after eight straight weeks as an emergency finally broke through for two senior games mid-year. His form tailed off slightly later in the year as the long season took its toll.

After a decent pre-season campaign, Cole suffered a quad injury on the eve of the 2017 season. He recovered to be a solid performer in the backline at WAFL level, and managed to add four senior games following the mid-season bye. On track for a Round 1 berth following a strong pre-season in 2018, Cole suffered the tragic loss of his father Russell to cancer on the eve of the season.[1] He was called up early in the season and became a fixture in defence from that point on, earning a Rising Star nomination late in the year and a premiership medal on Grand Final day.

Cole struggled to find the same form in 2019, and after playing the first 12 games was dropped in favour of Jackson Nelson. He returned for two games, but spent the rest of the latter half of the year in the reserves. Hampered at the start of 2020 by a fractured thumb, Cole broke into the side during the club's unsuccessful first Gold Coast hub stint, and became one of the year's success stories. Used on the wing on occasion, he kicked the first three goals of his career over a three-game period.

Retrieved from "https://eaglepedia.fandom.com/wiki/Tom_Cole?oldid=35317"
Community content is available under CC-BY-SA unless otherwise noted.