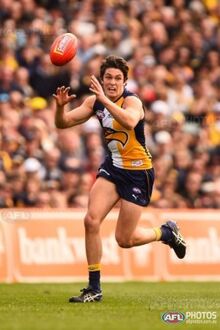 Promising key defender Barrass has established himself as one of the league's better stoppers since being drafted from Claremont.

Drafted with West Coast's third pick in the 2013 national draft, Barrass started the 2014 season on the injury list after surgery on a hip. After returning, he played just eight games for East Perth’s reserves before being sent off for a season-ending groin operation.

Barrass started the 2015 season in the WAFL reserves but quickly graduated to the league side, where he performed strongly against much more experienced opponents. His surprising form and the team's shortage of fit key defenders saw him called up to make his AFL debut against the Swans, and he played three late-season games.

2016 was a breakout year for the young key defender, who banged down the door with strong form in the WAFL before eventually getting a senior call-up. Once in the AFL side he performed well enough to hold former club champion Eric MacKenzie out of the side in the second half of the year, with his intercept marking a particular feature. Barrass won a Rising Star nomination in the final round.

Although he started the 2017 season outside of the best 22, Barrass quickly established himself in the backline alongside MacKenzie and Jeremy McGovern and played 19 games for the season. With MacKenzie injured in 2018, Barrass began taking the opposition's top forward target on a regular basis. After missing action in the second half of the year due to a persistent back injury, he hit form during the finals and performed a vital shutdown job on Collingwood giant Mason Cox in the Grand Final victory.

Barrass started 2019 strongly, but a month into the season he suffered a foot injury, one of several attributed to the harder Perth Stadium surface, that kept him out of action for several months, and struggled to recapture his form on his return. Barrass rebounded well in 2020, playing every game and finishing fourth in the John Worsfold Medal count, although he had his colours lowered by opposition forwards on occasion including by Mason Cox in the Elimination Final loss.

23/6/14: Young defenders packed off for surgery

Retrieved from "https://eaglepedia.fandom.com/wiki/Tom_Barrass?oldid=35401"
Community content is available under CC-BY-SA unless otherwise noted.