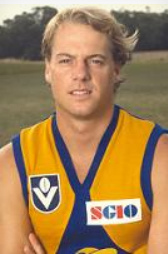 An undersized key forward boasting a booming kick for someone of his size, Todd Breman was a talented cricketer as well as a footballer. He played 10 Sheffield Shield matches for WA as a medium-pace bowler before eventually settling on football when West Coast indicated it would draft him at the end of the 1988 season.

Breman led Subiaco's goalscoring for two seasons before West Coast selected him with the second overall pick in the draft, which had been obtained from Brisbane in return for Alex Ishchenko.

Breman’s all-round talents unfortunately did not translate to success at VFL/AFL level. He had a reasonable debut season, playing 15 games and putting in a few strong performances such as games against Collingwood (28 touches and 9 marks) and Richmond (3 goals).

He managed just 7 regular season games in 1990, but was recalled for the preliminary against Essendon although he had little impact on that match. It was his last game for West Coast, as he failed to win selection in 1991.

Breman continued playing for Subiaco for a few seasons after his AFL career ended, and later had a brief stint as their colts coach.

Retrieved from "https://eaglepedia.fandom.com/wiki/Todd_Breman?oldid=23020"
Community content is available under CC-BY-SA unless otherwise noted.