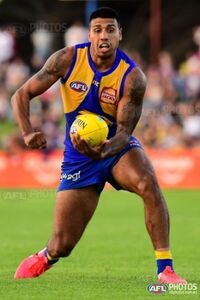 South Fremantle product Tim Kelly was drafted as a mature-age recruit by Geelong and became an instant star, before returning to West Coast in a mega-trade.

Kelly made his debut for South Fremantle in 2013 and spent several years plying his trade for the Bulldogs before a breakout 2017 season in which he finished second in the Sandover Medal saw him drafted by Geelong in the second round of the national draft. He immediately slotted into the Cats' midfield, finishing runner-up in the club's Best and Fairest in his two years at the Cattery and being named an All-Australian in 2019, recording a top-five finish in the Brownlow Medal that year.

With three very young children, Kelly was never settled in Geelong. He requested a trade to West Coast at the end of his first season but it could not be arranged. After seeing out his draftee contract, he again sought a trade to West Coast, who gave up a significant amount of draft picks to see the midfielder don blue and gold.

Kelly's first year as an Eagle was the 2020 coronavirus pandemic-affected season, with the star midfielder slowly integrating into the West Coast engine room. Although he only infrequently showed his Geelong form, he led the club to a stirring victory against St Kilda late in the season and finished seventh in the best and fairest.

Retrieved from "https://eaglepedia.fandom.com/wiki/Tim_Kelly?oldid=35297"
Community content is available under CC-BY-SA unless otherwise noted.