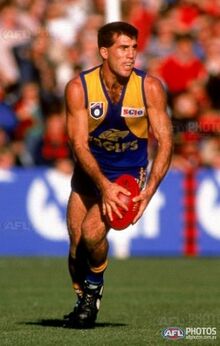 A prolific midfielder, Steve Malaxos was a highly-decorated WAFL player before becoming a member of the fledgling West Coast side in 1987. He went on to become the inaugural club champion and to captain the club.

Malaxos won a premiership, a Sandover Medal and two club best and fairests at Claremont as well as selection in the 1986 All-Australian team. He also won a VFL reserves premiership during a season at Hawthorn in 1985, but managed only 9 senior games in a strong Hawks outfit and returned to Claremont at the end of the year.

Having been secured by West Coast for their inaugural season (which required payment of a large clearance fee to Hawthorn), Malaxos made his debut in the opening round win over Richmond and went on to play 21 games for the year. He put in some eye-catching performances over that year, none more so than the final round win over St Kilda when he picked up an astonishing 48 touches (which remains a club record) and added 2 goals.

Due to injury Malaxos played just 2 of the first 14 games in 1988. He returned to play the last 8 regular season games and garnered 33 disposals in West Coast’s first ever final, a loss to Melbourne.

Injuries again restricted him in 1989, limiting him to just 12 games. Despite that, he was named as the successor to Murray Rance as captain of the club in 1990. He responded with another strong season, playing 20 games during the home and away rounds and picking up 11 Brownlow votes, including maximum votes for his roles in wins over Richmond and Sydney. However, injury hit in the latter part of the year and Malaxos struggled through the drawn qualifying final against Collingwood and the replay. With coach Mick Malthouse considering that Malaxos’ body couldn’t be relied upon to withstand the rigours of finals footy, he was controversially dropped for the sudden-death semi final against Melbourne and replaced as captain by John Worsfold.

Malaxos would never play for West Coast again, spending the entire 1991 season in the WAFL (shifting to East Fremantle midway through the season) before being delisted.

Following his delisting Malaxos played for East Fremantle, where he won premierships in 1992 and 1994 as his former Eagles teammates did likewise in the AFL. Malaxos later moved into coaching, having roles as an assistant at Sydney and later Fremantle. He spent several seasons as the colts and later senior coach at East Fremantle, before quitting midway through the 2015 season.

Retrieved from "https://eaglepedia.fandom.com/wiki/Steve_Malaxos?oldid=28885"
Community content is available under CC-BY-SA unless otherwise noted.