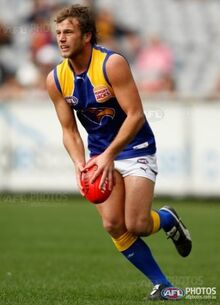 The third in the Armstrong dynasty was drafted from Perth to the other Demons - Melbourne - in the 2001 national draft after winning the Larke Medal in the national under-18s carnival. He played 43 games for the Dees in four seasons, despite being injured in the 2002 Bali bombing.

After being delisted by Melbourne at the end of the 2005 season, Armstrong was picked up in the rookie draft by West Coast. Usually a hard-working midfielder, he came into the side mid-season as a crumbing forward , a position the Eagles had struggled to fill after the retirement of Phil Matera and the decline of Ashley Sampi. Armstrong played five of the last six games of the year and held his spot for the finals series, kicking a vital last-quarter goal in the grand final as West Coast prevailed by a point.

Armstrong was in and out of the senior side in the next two seasons, playing 12 games in 2007 and another 14 in 2008. 2008 was probably his best season in an Eagles jumper, with the tenacious utility hitting a purple patch late in the season, averaging 25 touches across four games. Despite that form, his cards were marked and he was delisted at the end of the season.

Armstrong continued on at Perth, captaining the Demons for a couple of seasons before retiring at just 27 years of age to move into coaching as colts coach at Subiaco.[1] He spent 2017 as an assistant coach at Swan Districts,[2] before switching to Claremont in 2018.[3]

Retrieved from "https://eaglepedia.fandom.com/wiki/Steve_Armstrong?oldid=25411"
Community content is available under CC-BY-SA unless otherwise noted.