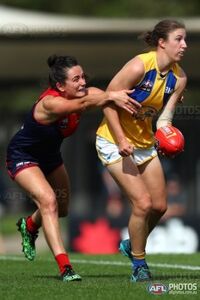 Albany product Sophie McDonald was signed from the Eagles' academy ahead of the club's entry into the AFLW competition.

After making a late change from hockey, McDonald spent 2019 as a key defender with Claremont in the WAFLW competition, additionally representing Western Australia at the national under-18 championships. On being signed she was described as competitive and having impressive athletic ability.[1]

Retrieved from "https://eaglepedia.fandom.com/wiki/Sophie_McDonald?oldid=32365"
Community content is available under CC-BY-SA unless otherwise noted.