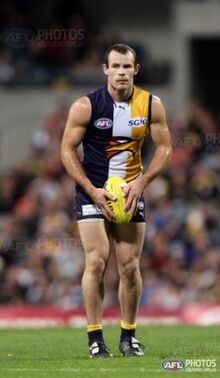 Owner of a booming yet precise kick, premiership skipper Shannon Hurn has become the side's 'quarterback', regularly setting up attacks from the defensive 50.

A talented junior cricketer, Hurn earned a rookie contract with the South Australian state side before deciding to focus on football. He captained the SA under-18s and was named All-Australian as well as winning back to back SANFL premierships with Central District. At the 2005 draft, he was predicted to go top 5 but slid to 13 where West Coast pounced.

Assigned to Peel Thunder, Hurn quickly gained notice with his thumping kick. He was called up for a debut against Brisbane early in his first season and goaled with his first kick. In a premiership-winning side, Hurn managed six games.

Hurn established himself as a regular in the side in his second season, playing every game for the year. He kicked 11 goals for the year and was nominated for the Rising Star for his 19-possession game against Essendon, eventually finishing fifth in the award behind Joel Selwood.

Disaster struck early in 2008 when Hurn broke his leg in a collision with teammate Brett Jones, causing him to miss the remainder of the year. He bounced back in a big way in 2009, again playing every game and finishing second behind skipper Darren Glass in the best and fairest.

2010 was a bit of a drop-off as Hurn missed games through suspension and calf and hamstring injuries, but he was back to his best in 2011 as the club rocketed off the bottom of the ladder. With Hurn directing traffic off the backline, West Coast charged into the preliminary finals. He finished fourth in the Club Champion award, and followed it up with a third-place finish in 2012.

After playing the first half of the 2013 season, his 64-game streak of games was snapped when he injured his ankle against Hawthorn, forcing him to miss the remainder of the year.

Hurn had solid 2014 despite a knee injury that caused him to miss four early-season games. When Glass announced his retirement mid-season Hurn rotated through the captaincy with other leadership group members, and was named as the permanent captain ahead of the 2015 season.

Despite leading the side to a Grand Final berth in his first year as skipper, Hurn wasn't as dominant off half-back as in previous seasons, although that may in part have been due to being forced to play on bigger opponents in the absence of Eric MacKenzie and Mitch Brown. He was more solid in 2016, with the availability of MacKenzie and the emergence of Tom Barrass freeing him up to return to his usual quarterback role. Hurn finished fifth in the Club Champion award, his highest placing since 2012, and brought up his 200th appearance in the losing Elimination Final. He remained a dependable leader in 2017, recording some big games in the second half of the year including a Glendinning Medal-winning performance in the final Western Derby to be played at Subiaco.

Hurn took his game to a new level in 2018, averaging 21 possessions and nearly eight marks a game, both career highs. He earned a maiden All-Australian selection, and etched his name in history when he joined John Worsfold and Chris Judd as West Coast premiership captains. That form continued in 2019, with Hurn receiving All-Australian honours for a second straight year as he brought up his 250th appearance and moved into fourth all-time at West Coast in games played by the end of the season. He reached second spot after another solid season in 2020, but was denied the chance to pass Dean Cox's record by the pandemic-shortened season and the Eagles' early finals exit.

Retrieved from "https://eaglepedia.fandom.com/wiki/Shannon_Hurn?oldid=35230"
Community content is available under CC-BY-SA unless otherwise noted.