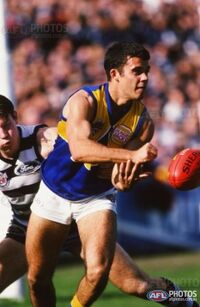 A lithe half-forward, Shane Bond won a premiership medal in 1994 before returning to his junior club Port Adelaide when they entered the AFL in 1997.

After being drafted, Bond spent 1993 with Port Adelaide before crossing to WA in 1994 and immediately breaking into the senior side. He played 21 games for the year, including the grand final when he kicked 2 goals from limited possessions. Despite that, coach Mick Malthouse hinted years later that he regretted picking Bond ahead of Mitchell White for the match.

Bond was named the club’s best first year player for his 1994 campaign, but unfortunately failed to go on with that strong showing in his time as an Eagle. Injuries and suspect form limited him to 10 senior games in 1995 and just 3 more in 1996, spending large amounts of time at East Perth. When Port Adelaide entered the AFL, Bond and fellow ex-Magpie Brayden Lyle were traded to the new Power side in a complex deal that saw Port sign tall utility Ian Downsborough and West Coast receive the number 1 pick in the draft (used to recruit Michael Gardiner).

Bond played 57 games for Port Adelaide before being delisted in 2001.

Retrieved from "https://eaglepedia.fandom.com/wiki/Shane_Bond?oldid=28919"
Community content is available under CC-BY-SA unless otherwise noted.