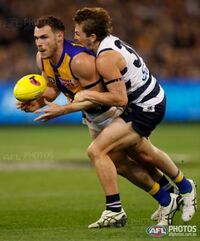 West Coast's premiership defence was finally snuffed out with a 20 point loss to minor premiers Geelong at the MCG. Stunned in the leadup to the game by the Willie Rioli tampering saga, the Eagles were slow out of the blocks and gave up five goals in the opening term before fighting back late in the half and taking a narrow lead into three-quarter time. They were unable to sustain it, however, and were held goalless in the final quarter as the Cats progressed to the preliminary finals. Andrew Gaff led the way for West Coast with 30 possessions and two third-term goals, and Nic Naitanui had 29 hitouts and seven clearances.

Both sides went in as named. The game was played in clear conditions.

"A 50-metre penalty against Sam Menegola for throwing the ball too hard at Eagles ruckman Tom Hickey in frustration just worsened things for the home team and gave the Eagles a seven point lead — their biggest of the match.

But the Cats rallied, with inspirational captain Joel Selwood getting them a goal back. They were close enough if good enough at the last change —there were just significant doubts over whether they were good enough.

But as it turned out it was West Coast that didn’t have enough left.

Geelong seized control with a preliminary final berth against flag favourites Richmond at the MCG next Friday night up for grabs. They kicked the only four goals of the final quarter."[2]

"Rocked on match eve by the news that small forward Wille Rioli had been provisionally suspended due to a drugs test abnormality, West Coast were jumped by the Cats, falling 32 points in arrears at the MCG after a narrow Gryan Miers miss 10 minutes into the second quarter.

But the Eagles swooped back with a blitz either side of half-time, reprising memories of their grand final comeback at this venue just under 12 months ago, edging clear midway through the third term. West Coast still led by four points at three-quarter time, but Geelong were unbowed.

Hawkins cast aside concerns about his own fate with an early major. Defender Jed Bews snuck forward to kick a rare goal, before Hawkins kicked another after marking in front of Tom Barrass. Luke Dahlhaus then slotted another. The Cats weren’t going to be denied."[3]

Retrieved from "https://eaglepedia.fandom.com/wiki/Semi_Final_2019?oldid=33178"
Community content is available under CC-BY-SA unless otherwise noted.