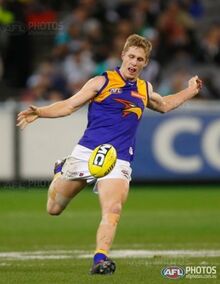 The youngest of the Selwood clan, Scott Selwood won a Club Champion award and served as vice-captain before returning to Victoria to join brother Joel at Geelong.

"Scooter" became the fourth Selwood in the AFL when he joined older brother Adam at West Coast in the 2007 draft, one year after Joel went to Geelong in the top 10 and five years after Adam and twin brother Troy (Brisbane) were drafted.

Allocated to Perth, Scooter made his debut early in the season. After a couple of games in the seniors, he went back to the Demons to continue his development but was recalled for round 16 and played the final seven games.

Given Michael Braun's number 10 jumper for his second season, Selwood was made to earn a senior spot through the WAFL, breaking into the side in round 7. He played 14 of the final 16 games, generally as a defender or defensive midfielder, and was one of the club's brighter spots in the promising run of wins to end 2009.

Selwood then cemented his place in the side in 2010, playing 20 games and finishing in the top 10 of the Club Champion count for the first time. He also began to move into the midfield, imposing himself as a quality tagger. That improvement continued in 2011, with Selwood becoming an important part of the midfield unit as the Eagles made a shock run to the preliminary final and averaging a phenomenal 8 tackles per game.

Used more as an offensive midfielder in 2012, Scooter benefited enormously from the freedom, averaging nearly 25 possessions a game including seven games where he picked up more than 30 touches. Selwood played every game for the season for the second year in a row, and was a surprise winner of the Club Champion award, narrowly pipping veteran Dean Cox.

His 2013 season wasn’t quite up to the previous year’s standard, with a broken thumb suffered against Hawthorn interrupting a run of 76 straight games. The tenacious midfielder still managed to pick up 25 possessions a game, recorded double figures in tackles on no less than seven occasions and finished 7th in the best and fairest despite missing four games due to his busted thumb.

Named as one of two vice-captains (along with Josh Kennedy) ahead of the 2014 seaosn, Selwood had a poor year by his standards. Shortly after the halfway point of the season the reason for that became clearer when it was revealed he had carried an ankle injury for most of the season without telling the medical staff, at which point he was sent off for surgery. The injury cost him the chance to audition as Darren Glass' successor following the skipper's retirement, with the captaincy being rotated among the other members of the leadership group and eventually awarded full-time to Shannon Hurn for 2015, with Kennedy and Selwood remaining as deputies.

Selwood's ankle continued to hamper him throughout 2015. The former best-and-fairest winner was limited to just 13 senior games, spending time at East Perth and missing out on selection in the grand final team. At the end of the season he announced his intention to join Geelong, signing with his brother's side as a free agent.

The youngest Selwood continue to battle injuries in Victoria, playing 34 games for the Cats in over four seasons. He was delisted by Geelong at the end of 2019, having managed just two games for the year.

After being delisted, Selwood signed with Collingwood as a development coach.[1]

Retrieved from "https://eaglepedia.fandom.com/wiki/Scott_Selwood?oldid=31529"
Community content is available under CC-BY-SA unless otherwise noted.