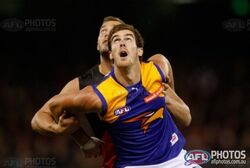 South Australian ruckman Scott Lycett performed well at senior level despite having to fight for opportunities behind some all-time greats, leading the ruck in the 2018 premiership before returning to Port Adelaide as a free agent.

Originally from the small port town of Thevenard, near Ceduna in South Australia, Scott Lycett played junior footy for Port Adelaide and SA before being drafted by West Coast.

A giant ruckman with a big tank, Lycett was originally allocated to Peel Thunder where he spent most of the 2011 and 2012 seasons. He was called up for a debut late in 2011 when Nic Naitanui was missing through injury, kicking two goals. Lycett made two appearances in 2012, again as a replacement for Naitanui.

In 2013 he crossed to East Perth as Peel became Fremantle's host club. With Naitanui missing the pre-season, Lycett was in the Eagles' side for the season-opener against the Dockers. He had little impact, however, and was replaced by rookie Callum Sinclair the following week. After some strong form with the Royals, Lycett was recalled in the second half of the season when Naitanui was packed off for surgery. He played the final six games of the year and impressed with much-improved athleticism, so much so that he was named the club's Rookie of the Year.

Lycett was again stuck behind Naitanui and Dean Cox for most of the first half of 2014, managing just three games and little impact. Eventually his great form at East Perth (and the threat of him leaving at the end of the year) proved too great to ignore and Cox was “rested” to allow Lycett an opportunity. He then played nine of the final 11 games as the match committee tried to rotate the rucks through the side, and signed a new long-term deal late in the season despite overtures from other clubs, particularly his junior club Port.

Expected to step into the side full-time after Cox's retirement, Lycett lost his spot to Sinclair early in 2014 and couldn't win it back. Injuries didn't help, as he battled osteitis pubis throughout the year and hurt his PCL the week after a strong showing against Hawthorn when both Naitanui and Sinclair were absent.

Given more responsibility in 2016 with Sinclair traded to Sydney, Lycett made a strong start to the year in partnership with Naitanui. Forced to shoulder the buck of ruck duties in the back half of the year when Naitanui was out with Achilles and later a knee injury, Lycett was hampered by a posterior cruciate injury of his own that required post-season surgery and threatened to keep him out for the start of 2017.

After missing the pre-season competition, Lycett's poor run with injury continued when he hurt his shoulder in his first WAFL practice match. He managed to return mid-season to play a handful of games for East Perth and one AFL game, but suffered complications in his shoulder that necessitated further surgery and an early end to his season.

Putting paid to queries about his durability, Lycett played every game in 2018, partnering first Naitanui and then Nathan Vardy in the ruck. Despite battling a hip injury late in the season he held his own, with Lycett and Vardy nullifying All-Australian ruckmen Max Gawn and Brodie Grundy during the finals series. Following the premiership win, Lycett signed with junior club Port Adelaide as a restricted free agent.

Retrieved from "https://eaglepedia.fandom.com/wiki/Scott_Lycett?oldid=28720"
Community content is available under CC-BY-SA unless otherwise noted.