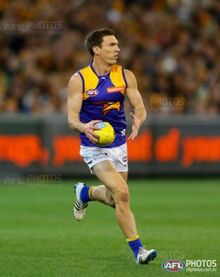 Originally from Gawler in the Barossa Valley, Butler arrived at West Coast in the 2003 draft along with fellow South Australian Beau Waters. The former soccer player made his debut midway through the 2004 season and played 12 games for the year, including the losing elimination final in Sydney, picking up a Rising Star nomination in a loss to Port Adelaide.

The midfielder added another 14 games in 2005, losing his spot late in the season but coming back in for the grand final after two months out when Michael Braun and Rowan Jones suffered knee injuries. Butler had an interrupted start to the season, missing the first couple of months and making his way into the side through WAFL side Perth. After being called up in round 13 he played every game from that point on, kicking a career-high three goals in the final round over Richmond and picking up 14 touches and a premiership medal in the Grand Final.

Unfortunately 2007 was virtually a complete write-off for Butler, with a bout of osteitis pubis limiting him to just a handful of appearances with Perth. 2008 was little better, with continuing groin and soft-tissue problems resulting in Butler playing just five senior games.

Butler saw an improvement in his fortunes during 2009, his body allowing him to play a full season although he struggled for form and was sent back to Perth for a couple of stints. A move into defence during the season appeared to pay dividends, but injury again struck the following year when he suffered a facial fracture early in the season, managing just three games on his return (wearing a helmet) before injuring a foot.

He added 13 senior games during 2011, missing a chunk of the latter part of the season with a quad injury but returning in time for the Eagles' finals campaign. The oft-injured defender played 14 games in 2012, interspersed among WAFL stints and by now all-too-familiar soft tissue injuries.

Butler finally brought up his 100th game in 2013, but seemed set for the scrapheap midway through the following season as the premiership veteran, despite having a lengthy period of actually being injury-free, spent most weeks at new WAFL club East Perth. He turned that around in the second half of the year after being given call-up, becoming an important part of the defensive unit with his class and poise across half-back and receiving the Best Clubman award at the end of the year.

Despite a couple of his customary soft-tissue injuries, Butler managed to play a career-high 17 senior games in 2015 and was again an important member of the team's defence, one of several players forced to play on much taller opponents in the absence of mainstays Eric MacKenzie and Mitch Brown.

The last remaining player from the 2006 premiership after the retirement of Beau Waters, Butler's body seemed to be improving with age in 2016, as he played 20 games for the first time and provided a steadying influence in the backline. He earned a long-awaited life membership when he reached the 150 game milestone in the second half of the year.

Butler started the 2017 season outside the senior team, eventually forcing his way in to play nine games before injuring his hamstring. He then underwent shoulder surgery that ended his season and ultimately his career, the popular defender calling time at the end of the season.

Butler took on roles in West Coast's marketing department and providing special comments on ABC radio. He also signed with country side Kulin-Kondinin in the Eastern Districts Football League, hoping to play a handful of games in the 2018 season around his club and radio commitments.[1] Butler shifted to Victoria in 2019, making a handful of appearances for St Albans in the Western Region Football League.[2]

Retrieved from "https://eaglepedia.fandom.com/wiki/Sam_Butler?oldid=31546"
Community content is available under CC-BY-SA unless otherwise noted.