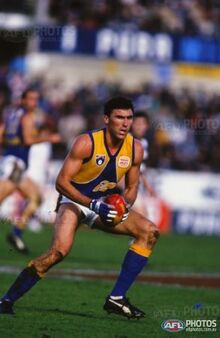 As well as being a more-than-serviceable ruckman and key position player at AFL level, Ryan Turnbull was also a decorated player with East Perth in the WAFL.

The son and grandson of Swan Districts greats (John Turnbull and Ted Holdsworth respectively), Ryan Turnbull played in a premiership with Claremont in 1989 before being grabbed by West Coast as a pre-draft pick. After spending a chunk of the 1990 season in the WAFL reserves (where he won another premiership), he switched to East Perth in 1991 and finally made his AFL debut against Hawthorn in round 7, playing four of the next five games. Turnbull had instant success at his new WAFL club, winning their best and fairest in his first season despite missing a handful of games while on Eagles duty.

Turnbull played just six more AFL games in 1992 and none at all in 1993, although he won a second B&F at East Perth that year. After 11 games in four years, he was probably lucky to survive the cull when list sizes were scaled back in advance of the 1994 season, but keeping him on proved a masterstroke as he played nearly every game for the season, leading the ruck in place of the fading Paul Harding. In the grand final, Turnbull paired with David Hynes in the ruck as West Coast won their second premiership.

Turnbull cemented his position as first-choice ruckman in 1995, playing every game for the year. However, he spent a large portion of the first half of 1996 in the WAFL and ended up playing just 14 games, playing in defence while splitting the rucking duties with Ian Downsborough. Despite that, Turnbull was named as starting ruck in the Eagles’ Team of the Decade, and also played in a grand final with East Perth.

The versatile Turnbull bounced back in 1997, playing every game. He again spent most of the season in defence, while backing up the permanent ruckmen Michael Gardiner and Ilija Grgic. 1998 was less impressive, with Turnbull playing just eight unremarkable games as the club preferred Jason Ball as Gardiner’s backup. The entire 1999 season was more of the same – despite Turnbull’s form at East Perth being good enough to win him a third Best and Fairest and almost a Sandover Medal to go with it, he found himself behind Gardiner, Ball and even Laurie Bellotti in the pecking order and failed to play an AFL game.

Another golden opportunity came in 2000 when Ball sought a trade to Sydney. Back in the side as Gardiner’s backup, Turnbull took over as the leading ruckman when Gardy went down injured mid-season, and put in some eye-catching displays including 29 hitouts, 20 possessions and 2 goals in a loss to Adelaide.

The 2000 season proved to be something of a last hurrah for Turnbull at AFL level, with the emergence of Dean Cox alongside Gardiner leaving the veteran without a spot. He added just three more games in blue and gold (and ochre at that stage) and was delisted at the end of the year.

On a random statistical note, his 129 games in the #50 jumper remains a VFL/AFL record.

Proving that he was still a force to be reckoned with in the lower league, Turnbull won the Sandover Medal in 2001 as well as the Simpson Medal as the best-afield in East Perth’s premiership win. He followed that up with a second Simpson Medal in 2002 and was the co-captain of the Royals in 2004, before retiring at the end of that year.

In retirement, Turnbull occasionally provided special comments on ABC’s WAFL telecasts. Late in 2018, he was announced as an assistant coach for West Coast's inaugural AFL Women's side, scheduled to join the national competition in 2020.[1]

Retrieved from "https://eaglepedia.fandom.com/wiki/Ryan_Turnbull?oldid=28678"
Community content is available under CC-BY-SA unless otherwise noted.