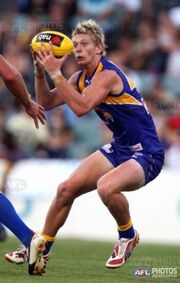 After impressing for North Shore and the NSW-ACT Rams as a junior, Ryan Davis was signed up by West Coast under the New South Wales scholarship scheme, and then added to the club's rookie list for the 2008 season.

Davis initially played for Swan Districts on moving to Perth, but was quickly called up to the seniors just a couple of months into his first season. After being elevated off the rookie list in place of the injured Mitch Brown, Davis made his debut against North Melbourne on the Gold Coast. He played 11 games for the season, generally as a defender.

Davis added another three games in 2009 after being elevated to the senior list again (this time to replace Beau Waters) but spent the majority of the year at Swan Districts. At the end of the season he elected to try his hand in the national draft rather than accept the club's offer of a third season on the rookie list.

After being passed over in the draft, Davis remained at Swan Districts where he played in their 2010 premiership. After a number of years toiling away in the WAFL, he was surprisingly thrown a lifeline by Gold Coast in the 2016 rookie draft. Davis played 19 games in his first season with the Suns, generally as a small forward, but after adding just two games in 2017 he was delisted.

Davis remained in Queensland after leaving the Suns, signing with NEAFL side Southport. [1]

Retrieved from "https://eaglepedia.fandom.com/wiki/Ryan_Davis?oldid=31726"
Community content is available under CC-BY-SA unless otherwise noted.