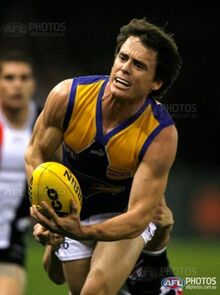 Much-maligned for a large part of his career, Jones is best remembered as one of the heroes of the 2006 grand final win over Sydney.

Selected in the second round of the 1997 draft (just before Simon Black, but let’s not dwell on that), Jones made only a couple of unremarkable late-season appearances in 1998. He was able to force his way into the side in his second season, playing 16 games including the losing semi-final against Carlton.

The useful utility player was a regular in the senior side for the next few years, playing 20 games in 2000 and 18 in 2001 during the dark post-Malthouse era. 2001 was probably his best year - as well as coming equal third in the Club Champion award the unobtrusive youngster also picked up the Best Clubman medal, showing just how highly regarded he was around the club.

A knee injury cut short his 2002 season but Jones rebounded in 2003, playing every game and finally starting to earn accolades for consistently doing all of the little things that often go unnoticed – second efforts, tackles and laying blocks for the bigger-name midfielders like Judd, Cousins and Kerr. This was reflected in his selection as a vice-captain under Cousins for the 2004 season.

Unfortunately, his elevation to the leadership group coincided with a loss of form. Although Jones played 16 senior games in 2004, he struggled to have an impact on games, spent some time at Claremont (for the first time since the 1990s) and missed selection for the elimination final as his always-questionable kicking skills started to become a real concern. His 100th senior appearance against North Melbourne was a good indicator of how his season went, RoJo getting just 5 touches in a disappointing loss at Manuka Oval.

Consequently, when the 2005 season rolled around Jones found himself dropped from the leadership group and dropped to the WAFL. Despite racking up some big numbers with the Tigers, selectors seemed reluctant to recall Jones. He had to wait until late in the season for his opportunity, playing three of the last six games home-and-away games but found himself back at Claremont as the finals started. Surprisingly recalled for the preliminary final against Adelaide, Jones probably did enough to hold his spot for the following week but was ruled out after suffering a knee injury at training. He watched from the stands along with Lynch, Braun, Phil Matera and Brett Jones as his teammates suffered a heartbreaking loss to Sydney.

Back in the side on a regular basis and back in the form that he displayed earlier in his career, Jones played a big role in the team’s run to the grand final in 2006. Quiet throughout the big day, Jones had a massive impact in the final seconds, winning a critical contested ball and feeding out a handball to Lynch to prevent a desperate Sydney forward thrust.

Now a premiership player, Jones played almost every game in 2007, his best performance coming in the final round of the regular season when he had 30 touches and 3 goals to drag West Coast over the line against the Bombers in James Hird’s last match.

Despite being in good form and still months short of his 28th birthday, Jones announced his retirement at the end of the 2007 season to pursue a career in finance and spend more time with his family. His surprise retirement came at a time of immense upheaval for the club, along with Chris Judd’s defection to Carlton and the controversial delistings of fellow premiership players Ben Cousins and Daniel Chick, and as a result was somewhat overshadowed. Despite vocal criticism from fans later in his career, Jones left a legacy as a premiership winner, 150-game player and Best Clubman.

Retrieved from "https://eaglepedia.fandom.com/wiki/Rowan_Jones?oldid=33352"
Community content is available under CC-BY-SA unless otherwise noted.