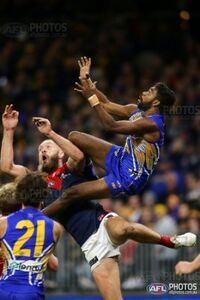 West Coast came from behind to record an important victory over Melbourne, putting through six goals in the final term to thwart the Demons' efforts to take revenge for their preliminary final exist the previous year. Melbourne controlled the midfield for the first three quarters thanks to ruckman Max Gawn's dominance, but squandered chances and left the door open for the Eagles' fourth-quarter revival. Elliot Yeo was immense with 26 possessions (18 contested) and a career-high 16 tackles, and Josh Kennedy kicked four goals.

Milestones: Ryan Mark of the Year

West Coast replaced Schofield with Hickey before the bounce, with the defender failing to recover from a heavy clash the previous week. The change forced Allen into defence, with Hickey and Vardy double-teaming All-Australian ruckman Max Gawn. The match was played in fine but chilly conditions.

"It would have been a great game to watch. I thought Melbourne just came over and threw everything at us. It looked like a really good game. There were ebbs and flows. We couldn’t stop their ball movement. Their speed and the way that they attack the corridor was something we prepared for but to shut it down was really difficult. We were probably fortunate there at stages with supply against us. That was a concern, but I thought the boys handled it quite well in the end. In the last quarter, it was just a tough, hard slog. I’m really, really proud of our players.

"...I think we’re still a little bit inconsistent. We haven’t quite hit a four-quarter performance, but we’re winning, so that’s the pleasing part. We’re 6-3 and hopefully setting up a really good platform for the second half of the season. But no, we’re not playing at our best. Teams are shutting us down; we’re not helping ourselves as well, but if we’re alive in the contest we can keep getting to work.

"The way we played in the last was around the contest, around winning the ball and getting deeper entries and all those type of things that you want as a coach. The boys have been together for a while, they know some of the things that we can go to if we have to. We’d just like to start a bi better and get a little bit more consistent with our ball movement throughout four quarters. But Melbourne was tough, that was a tough game. I’ve said this before, but winning’s really hard and we’ll take what happened tonight any day of the week."[2]

"The contrasting styles of football made for intriguing viewing.

The frenetic pressure from both sides resulted in some big bumps and bruises - and a guernsey torn to shreds.

Eagles speedster Jack Petruccelle was running at full pace when he was grabbed by Frost, who ripped his opponent’s jersey clean down the seam."[3]

They held on to hold a four-point advantage at half-time and by 12 points at the last break.

But their disposal let them down and they were wasteful in front of goals. They led by 19 points in the third term, but then started to overuse it.

They had 15 more inside 50 entries than the Eagles and four more scoring shots."[4]

West Coast suffered a sizeable loss to former reserves affiliate East Perth on a chilly Thursday night. In front of a sparse crowd, the Eagles fought back to narrow the margin to 21 points at the final change but the Royals were able to pull away in the last term to run out 34 point winners. Brayden Ainsworth had a team-high 27 possessions and Matthew Allen had 20 touches and a goal.

Retrieved from "https://eaglepedia.fandom.com/wiki/Round_9_2019?oldid=31928"
Community content is available under CC-BY-SA unless otherwise noted.