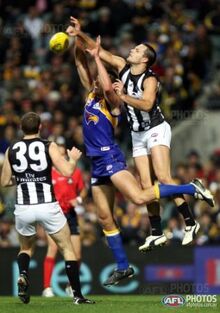 West Coast had a handy lead early but squandered their chances in the second quarter to trail at half-time. Collingwood then kicked three quick goals at the start of the second half to take full control, and led by as much as 35 in the final quarter before a couple of late Ben McKinley goals improved the scoreboard a little.

There was a general bye in the WAFL as a representative side played the best of the SANFL.

Retrieved from "https://eaglepedia.fandom.com/wiki/Round_9_2009?oldid=19561"
Community content is available under CC-BY-SA unless otherwise noted.