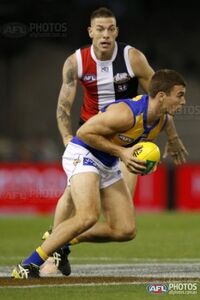 West Coast had a hard-fought win over St Kilda in Melbourne to move back into the top eight and stay in touch with the ladder leaders. The Eagles looked to have the game sealed with a six-goal third term, but left the door ajar for St Kilda with a series of behinds in the last term. Andrew Gaff had a team-high 30 possessions and Jamie Cripps tallied 21 touches and two goals against his old side in his 150th AFL game.

Both sides went in as named. The game was played under a closed roof, but the umpires threw the ball up in the centre rather than bouncing it due to some soft turf.

"It was an even performance. We don’t like to rely on just our A graders. It was disappointing we couldn’t convert in the last, but I thought our players worked through the situation pretty well. The Saints are playing a really good system at the moment and you’ve got to be at your best to break it down. For a while there (it was) whoever converted the best off turnovers and it just felt like it was spinning around a little bit. I thought our players worked through something a little different in the last quarter and we didn’t get rewarded. It got a bit scratchy in the last couple of minutes, but the numbers, the supply, the shots on goal – all the things pointed towards a good win.

"... I was really proud of our players. Winning’s hard, it’s bloody hard. There’s nothing that you notch in. I know we’re coming off a pretty good season last year but we’re not going into every game thinking we’ll just rock up (and win). If we do that we’re not going to win. We’ve had some really disappointing games at stages, but the last couple of weeks we’ve looked positive. We’re not saying we should win by more, not at all. We have too much respect for St Kilda and the way they’re coached and the way they have talent and how they executed what they’re trying to do was very good as well.

"Our pressure, our tackling, our ground balls, our efficiency with the contest; all the basic things (have improved). We’ve still got work to do, we’re not perfect, but I think now we’re in the fight. We’re definitely still building towards, hopefully, better footy, but you can’t do that until you get the contest right. The contest is so broad. Contested ball is such a flawed stat, because there are so many things underneath it that you’ve got to look at. Some teams concentrate on different parts of contested ball, but we were down on almost all of them. We’ve got that better and that allows us to get on with the other parts of the game."[2]

"The Eagles kicked the opening two majors and led by eight points at the first break after a goal on the siren from St Kilda’s Jade Gresham.

When West Coast opening the second term with two quick goals, a long night appeared to loom for the Saints.

But St Kilda impressively worked their way back into the game, kicking the only other two goals before halftime to trail by just seven points.

Saints fans were raging about the 7-3 free-kick count, with a string of calls going against their team."[3]

"Most of West Coast's better players were up and about and when St Kilda made a thrust in the early part of the third quarter, moving within a goal when Dean Kent threaded a goal from an angle, they went to another level. The Eagles kicked the next four goals and in what was otherwise a tight match, this was the most significant period.

St Kilda played a strong last quarter – four goals to one – but the run came too late.

It is depth of midfield talent that makes West Coast stand out from the crowd, with 150th-gamer Jamie Cripps (21 disposals and two goals) joining the more highly rated Yeo, Shuey, Gaff, Dom Sheed and company in that impressive group on the night against his original team. Of the Saints' midfield group, only Seb Ross, Luke Dunstan and Jack Billings managed to compete on even terms."[4]

League-wide bye as a WAFL representative side hosts South Australia.

Retrieved from "https://eaglepedia.fandom.com/wiki/Round_8_2019?oldid=31927"
Community content is available under CC-BY-SA unless otherwise noted.