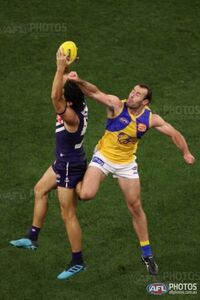 West Coast won a record tenth straight Derby, overcoming a shaky start to control play throughout the second and third terms en route to a 30-point victory. In front of a restricted-capacity crowd of mostly Fremantle fans, the Eagles held the home side scoreless in the third quarter and to just seven scoring shots for the match. In his 250th AFL game, Josh Kennedy won a third Glendinning-Allan Medal for his four-goal haul, and defenders Brad Sheppard and Jackson Nelson each tallied 23 possessions.

West Coast was forced to replace skipper Shuey, who failed to recover from his hamstring injury in time. The match was played in clear but chilly conditions.

"There was nothing separating the teams mid-way through the second term when some of West Coast’s cream decided it was time to do some separating.

Kennedy kicked his second with a left-foot snap and it set the scene for Elliot Yeo and Tim Kelly to do what they do best, winning centre clearances, which set up goals for Jarrod Cameron and Jake Waterman.

In the blink of an eye, the margin had blown out to 20 points, though Michael Waters decided he could get in on the act and answered with a clearance of his own to set up Rory Lobb.

The Eagles led by 15 points at the major break, with five clearances each to Yeo and ruckman Nic Naitanui being a big reason for that ascendancy against a more even Freo midfield effort."[1]

"Fremantle began the better of the two sides but a three-goal flurry in 90 seconds of playing time toward the end of the second term opened up a gap between the sides, before a polished third-term effort put the game beyond doubt.

In that third term the Eagles had 16 inside 50s to their opponents four. The wall of Eagles - the one that helped deliver a premiership in 2018 - led by Shannon Hurn, Tom Barrass, Brad Sheppard and Jeremy McGovern marked and spoiled everything Freo threw their way.

At the other end of the field Josh Kennedy and Jack Darling were irresistible targets while Elliot Yeo, Tim Kelly, Andrew Gaff and Jack Redden turned the screws on West Coast's comparatively lightweight engine room.

Fremantle began the final term with a quick goal to Rory Lobb and then two bad misses - to Lobb and Matt Taberner - which excited the majority of the 25,306 fans at Optus Stadium, although Kennedy won a free kick near goal and converted to snuff out that challenge."[2]

With West Coast and Fremantle players in state-ordered quarantine, no reserves scrimmage was organised.

Retrieved from "https://eaglepedia.fandom.com/wiki/Round_7_2020?oldid=33064"
Community content is available under CC-BY-SA unless otherwise noted.