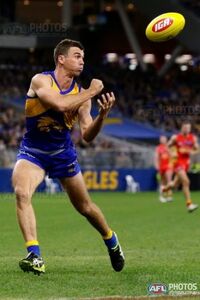 West Coast returned to the winners' list, but in unconvincing fashion, with a 23-point victory over Gold Coast at Perth Stadium. The hosts set up the win with a big second term, kicking six goals to one to open up a 39-point lead at the main break, but the Suns dominated the second half and closed the margin to just 11 points before the Eagles kicked the last two goals of the match to seal the win. Elliot Yeo signalled a return to form with 28 touches and 12 tackles, and in-form defender Brad Sheppard had 25 disposals at 96% efficiency.

West Coast switched ruckmen with Vardy replacing Hickey, who had a low grade hamstring strain. After rain earlier in the day, the match was played in fine conditions.

"The first half was really solid. I think all night the contest was reasonable. The second half we were a bit scratchy, but to finish the game off, get a win ... I saw some positive signs for some individuals, which was really good. We’ve still got work to do.

"I think we’ve got to give [the Suns] credit for stepping up in the second half. I think tactically there wasn’t a lot of change. It was a bit of a scrap in the third quarter I suppose. Whether they made it a scrap or not, I thought we butchered the ball in our back half a bit, which fuelled turnovers. But the contest was pretty good most the night. I think from stoppages we kicked 5.6 to a couple of points. And then the turnovers, they just pipped us. I think the contest for most the night was pretty solid, I just thought our turnovers in the second half made us vulnerable.

"...Centre clearances are important. It ebbs and flows with momentum, strategic plans going into the game and we’ve got a mixture of different ruckmen in there. I don’t think we concede a lot of scores against, but we’re not getting a lot of scores for. That’s ongoing, definitely ongoing."[2]

"In what was a game of two distinct halves, a slick West Coast booted eight goals to two in the first half before falling apart after half-time when the diligent Suns were able to deny them their trademark kicking game.

The Suns had trimmed a 42-point deficit to just 11 points early in time-on of the last quarter thanks to five consecutive goals.

The unthinkable was on for the $10 outsiders until Jack Darling, who had earlier set the game alight with a purple patch in the second term, kicked his fourth to steady the ship.

Big games from star midfield trio Andrew Gaff, Elliot Yeo and Luke Shuey ultimately got the Eagles over the line."[3]

"West Coast's error-riddled display in the third term allowed the Suns back into the match, and a 50m penalty also helped Gold Coast's cause.

The umpire had actually said 'move it on' to warn Miles that he was running out of time to take his kick.

The ensuing 50m penalty and goal reduced the margin to 28 points at the final change, and Gold Coast's charge continued from there before Darling's late goal killed off the fightback."[4]

A wayward West Coast fell back to earth with a heavy loss to South Fremantle at Fremantle Oval. The Eagles kicked the last three goals of the second term to close within 16 points at the long break, but the floodgates opened in the second half with the Bulldogs kicking 12 goals to storm to a 59=point win. Brendon Ah Chee had a game-high 32 possessions and took a Mark of the Year contender, and Josh Rotham had 21 touches in defence.

Retrieved from "https://eaglepedia.fandom.com/wiki/Round_7_2019?oldid=31926"
Community content is available under CC-BY-SA unless otherwise noted.