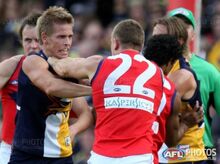 West Coast were given a scare by a determined Melbourne side, the Demons leading by 11 during the third quarter before four late goals (two to Mark LeCras) gave the Eagles a useful buffer heading into the final term. Once again West Coast squandered chances in front of goal, only recording an 8-point win despite having nearly twice as many scoring shots as their opponents. LeCras finished with four goals but also kicked six behinds, and Josh Kennedy took nine marks in his first game of the year but also wasted a couple of shots.

"Melbourne's 35 tackles to the Eagles' 20 at half-time was the perfect indicator of its workrate, with Dean Cox edging a willing Paul Johnson in the ruck, and Nathan Jones - and his head - shining like a beacon in Perth's afternoon sunshine.

At the heart of everything good the Demons did, it was Jones' influence that dragged Melbourne into a brief lead late in the first half, presenting Miller with three successive goals on a plate.

Trailing by four points and two players down at the main break, the Demons were still outsiders - but for most of the third quarter dominated possession, making the usually forgiving Eagle natives very restless indeed.

Jones' first and a second from the increasingly dangerous Russell Robertson brought the prospect of a horror loss looming into West Coast's view.

But the hulking presence of Quinten Lynch in the ruck gave the Eagles three successive clearances, which led to the goals that turned a two-goal deficit into a near three-goal lead that Melbourne just failed to reel in. "

Retrieved from "https://eaglepedia.fandom.com/wiki/Round_7_2009?oldid=19551"
Community content is available under CC-BY-SA unless otherwise noted.