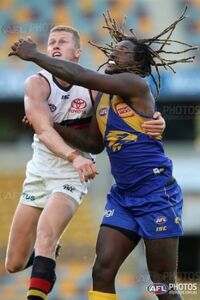 West Coast comfortably defeated the winless Crows in the club's final game before heading home from the Queensland hub. At the neutral Gabba venue, the Eagles were well held by Adelaide before breaking the game open with three quick goals at the start of the second half. Tim Kelly led his new side with 25 possessions and eight clearances and Elliot Yeo added 21 touches and five tackles.

Both sides went in as named. The match was played in fine conditions at the neutral Gabba venue.

"A bit like all the games at the moment, pretty scrappy. I thought we defended pretty well after the first 15 minutes and we got good field position from our mids and clearances. Tim Kelly is building into his season and I thought he was one of our best. We probably just missed opportunities to score when we had that much supply, so we need to work on our entries. But that’s a great problem; I’ll take that any day of the week.

"...We’ve had good supply the last two weeks. There are not many teams capitalising on their field position; it just seems to be quite dirty footy at the moment. Maybe we’re all victims of having so much time off and we lose that connection training in eights and those sorts of things. We’ve got to find a way to connect a bit better with our forwards. But like I said that’s a really good problem to have. Team defence is the one thing we focused on today and I thought that was okay for us.

"...Nic plays on the edge. I think we were all thinking "you’ve poked the bear". I think he’s been in really good form. He’s held up his end for every game, so he’s having a good year and he’s connecting well with our mids and giving them good supply. Oscar I thought held up his end as well."[1]

"At his best, Kelly is a direct player who knows the shortest way to goal is in a straight line and there was no greater example than in the third term.

The Geelong recruit won the clearance and then raced forward to gather his own kick, handballing to Jack Redden who slotted a running goal.

Selflessness was the theme of the quarter as West Coast turned it on to showcase their best football of the hub on its final day.

The sense of team was emphasised when Oscar Allen immediately apologised to teammate Jamie Cripps for marking his shot on the goal line.

And it was underlined again when Liam Ryan desperately sprinted to keep the ball alive for Jack Darling, who kicked his second goal and become the game’s only multiple goal kicker."[2]

"From the outset, Adelaide got out of the blocks nicely with a goal from Tom Lynch after less than two minutes. But the Eagles settled, finding their feet to establish their advantage by quarter-time.

Naitanui was putting his stamp on the match and his solitary major – at the 18-minute mark – was also West Coast's first.

Big guns Jack Darling and Josh Kennedy slotted the first two goals of the second term and the 2018 premiers had jumped to a 20-point break. At that point, West Coast looked solid but Chayce Jones slotted one for the Crows to keep them in touch at the main break.

Despite Adelaide's predicament, there's always a silver lining. The Crows outscored the Eagles in the final quarter, albeit marginally, to soften the blow. Adelaide fans also witnessed a solid display from first-year player and high draft pick Fisher McAsey, who kept trying at both ends of the ground."[3]

West Coast's squad played a scratch match against Brisbane. Few details were available, but it was later reported that Jack Petruccelle had suffered a serious hamstring injury late in the match.

Retrieved from "https://eaglepedia.fandom.com/wiki/Round_6_2020?oldid=32936"
Community content is available under CC-BY-SA unless otherwise noted.