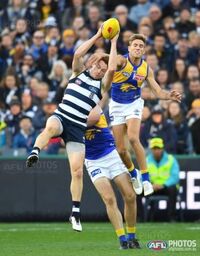 West Coast's run of horror form continued with a thrashing at the hands of the Cats in Geelong. The home side looked ominous early with seven goals in the first term, and extended their lead at every break as the Eagles were unable to get themselves involved in the play. Tom Hickey, playing as his side's sole ruckman, impressed with 25 possessions and 32 hitouts, and Jeremy McGovern was resolute in defence.

Reports: Cole for misconduct against G.Miers

Both sides went in as named. The game was played in fine and clear conditions.

"We've had "one of those nights" for two weeks, we're just ... We can't play our way if we can't win the ball. Unfortunately we were outplayed again around the contest. It's very hard to identify what style we're playing at the moment if we can't win the footy.

"...I thought we prepared pretty well, we've got some younger players in our front half which have shown some pretty good signs, but tonight was a poor night for almost everyone, I think. Hickey was pretty good for us in the ruck, we tried something a little bit different with our ruck structure, that was developing which is pleasing for us. I thought Gov held on as long as he could. But outside of that, Shannon Hurn maybe? Take your pick about what was disappointing, but we really can't do anything if we don't win the ball. The contest, and ahead of the play we couldn't win a contest. We can't lock it in our front half. There is a lot of work to do, so I'm not going to sugar-coat anything.

"...I'm just trying to work out now whether it's the dynamics in the front half or it's the supply. Give us 50-plus inside 50s, then we can probably rate our forwards a bit more. Having said that, every time it came in tonight Geelong were red-hot. They had a really good way of playing. We weren't surprised by too much, they just played their way. Executed extremely well, looked clean, looked tough, were very well-organised, well-coached. We couldn't match them."

"Ablett and former Swan Gary Rohan were the dominant figures in a first-quarter onslaught by the home side.

Rohan had three goals by quarter-time, two of them from pinpoint passes by Ablett who had 10 disposals - all of them effective - in the opening half-hour.

After a largely forgettable second quarter with just one goal kicked by each team, normal service resumed in the third term, with the Cats extending their lead to a game-high 58 points at the final siren.

"Gary Rohan kicked three goals in the first quarter and Tom Hawkins two in the same period as the Eagles struggled to contain the clean and fast ball movement while Esava Ratugolea returned to form after a quiet fortnight.

However it was Ablett who set the tone with perfect ball use, not only kicking two goals but using the ball with maximum efficiency as he grabbed 28 disposals.

Whenever the master went near the ball the Cats soon found themselves in a better position as he twisted, turned and then deposited the ball into a teammate's grateful hands.

The Cats' defensive pressure was several notches higher than the Eagles with many West Coast players struggling to make a contribution with only the obvious ball winners Andrew Gaff and Luke Shuey providing any drive while captain Shannon Hurn and ruckman Tom Hickey battled hard."[3]

West Coast upset ladder-leading Claremont in a close tussle, with the Eagles going well ahead at quarter-time before two lean quarters saw the Tigers threaten to run away, and then fighting back in the last to take the lead and hold off the home side in the dying stages. Young midfielder Hamish Brayshaw had a team-high 28 possessions and Jackson Nelson tallied 25 from half-back, but the Eagles lost Francis Watson to an AC joint injury shortly after half-time.

Retrieved from "https://eaglepedia.fandom.com/wiki/Round_6_2019?oldid=31925"
Community content is available under CC-BY-SA unless otherwise noted.