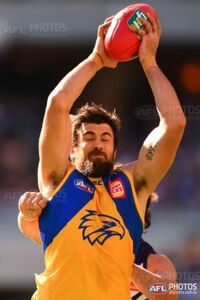 West Coast finished on top of Fremantle in a classic Western Derby, the first to be played at the new Perth Stadium. After a poor start, the Eagles took control of the match in the second term and were able to hold off a determined Dockers side throughout the second half to claim their fifth straight win for 2018 and their sixth straight Derby. Jack Redden had a big second half to finish with 34 possessions and skipper Shannon Hurn tied with Fremantle's Lachie Neale for the final-ever Glendinning Medal after tallying 31 disposals off half-back. Josh Kennedy's first goal put him past Peter Sumich as the club's all-time leading goalscorer.

Reports: Shuey for kneeing B.Banfield, Masten for misconduct against E.Langdon

Both sides went in as named. The match was played in warm conditions in front of a new record crowd for WA football.

"I thought we had a pretty good game collectively. I thought Freo threw everything at us and, early, we had dominance with field position and supply but we couldn't finish off and every time it went up the other end we got goals scored against us. At quarter time, while we weren't in front on the scoreboard there were some numbers that (showed) if we kept going we would get back into the game. We held our nerve a little bit and in the second quarter we got rewarded. Then after half time that probably flipped a little bit and then it became a little bit of a grind in that last bit. It was a fight all day and in the end we came out on top.

"...It was as big as last week. In the scheme of things - the day, the build-up - it is a massive game. It feels like a final, but it isn't. We embraced the week. I don't think the boys were too nervous before the game. They were in a pretty good headspace. There is a really good spirit among the players, they play for each other. We stand back a little bit and let them go to work.

"...The midfield I thought as a collective was pretty proud. It is not a new group, but there are new responsibilities. That is off the back of two new ruckmen and a couple of quality mids leaving the club. They have got a real sense of purpose and they want to get it done. They don't want to rely on one person. I thought they did that today."

Ruckman Scott Lycett upstaged his more illustrious couterparts Nic Natianui and Aaron Sandilands and could consider himself a little unlucky not to have figured more in Glendinning Medal calculations. Andrew Gaff had 32 disposals and Jack Redden was both a monster at stoppages and a threat in attack.

Neale had helpers, but the Dockers could not get the brave and decisive ball movement going that has marked their wins this season. Ed Langdon not only had 26 disposals, he also kicked two goals. David Mundy kicked one and was useful and Alex Pearce and Joel Hamling fought mighty duels with Josh Kennedy and Jack Darling. They gave plenty, but it wasn’t enough.

The Dockers overcame a nervous start to the term to kick four goals to one and take a 20-point lead to the first change but the biggest story of the quarter was star forward Michael Walters clutching at his left knee – the one in which he suffered a posterior cruciate ligament injury last year. It would hurt them when they most needed goals at the other end of the match."

"Cam McCarthy managed two goals and looked dangerous, but he could have and should have booted more.

Having him as their sole obvious target in attack also made life easy for West Coast’s intercept marking expert Jeremy McGovern.

At quarter-time, the Dockers had gone into attack seven times. They had 4.3 on the board, but McGovern had already taken five marks and had nine possessions. He finished with a handy 10 marks and 19 touches.

Most of the Dockers concerns came further up the ground. They only had 45 inside 50 entries for the game, compared to the Eagles 55."

East Perth recorded a sizeable win over Peel at Leederville Oval, holding the Thunder at bay for most of the match before racing away to an 11-goal victory in the final term. Mark Hutchings responded well to his demotion with a team-high 33 possessions and 14 marks and Matthew Allen kicked a career-high five goals, but Nathan Vardy broke down in his first game of the year.

In the leadup to the match the following players were listed as injured:

Retrieved from "https://eaglepedia.fandom.com/wiki/Round_6_2018?oldid=30468"
Community content is available under CC-BY-SA unless otherwise noted.