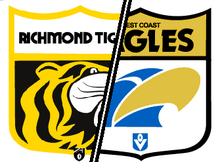 West Coast held off a determined Richmond to score a 35 point win and move to top spot on the ladder. Steve Malaxos was the leading ballgetter with 25 possessions and Peter Sumich kicked six goals including three in the final term.

Richmond put up a gallant effort for the first three quarters and got within 11 points late in the third term.

But the West Coast Eagles settled down, and with Peter Sumich firing in three of his six majors in the final term, managed to win their fourth consecutive game and their second in Melbourne for the season."[1]

Retrieved from "https://eaglepedia.fandom.com/wiki/Round_6_1990?oldid=31704"
Community content is available under CC-BY-SA unless otherwise noted.