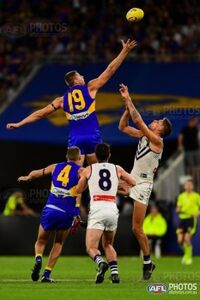 West Coast won their eighth straight Derby in a scrappy, forgettable encounter. The Eagles burst out to an early lead with a five-goal first term, but found the going tough thereafter as the game descended into a dogfight. Shannon Hurn won his third Glendinning-Allan Medal with a 32-possession effort off half-back and Andrew Gaff had another 35-possession game to shrug off pre-game speculation about his return to the Derby arena.

(*Ainsworth replaced Watson in the emergencies)

West Coast replaced Jetta before the bounce with second-gamer Rotham, due to hamstring tightness. The match was played in fine but humid conditions, making ball-handling difficult at times.

"It was a grind, no doubt, and I think people are still trying to get a read on where Fremantle are at, and we're still working ourselves out as well, but I think they're better than what some people think. We were accurate at the start, and just held them at bay for most of the night, but not a lot went right for us other than the score. We won the stoppage battle, but yeah it was a grind. But we've had plenty of grinds in the last 12 months, so we'll take the win, but we tip our hat to what Fremantle did tonight, and how they played, and the contest. It wasn't like we were turning up our toes, we just got beaten up in certain parts of the ground which need to improve, but at the end of the day, we get the four points.

"...We prepared for a game like we got. I wasn't surprised about tonight, and that's why I'm pleased. We got through a grind. Last year, we won against Carlton earlier in the year with a grind game, and I think this was one of those nights where it was a grind.

"...I think our team defence was poor, but our ability to win a contest when we really needed to was important. Low scoring game, they kicked plenty of points. I think at quarter time when we got our lead, one scoring shot the difference - we just kicked 5.1 and they kicked 5 points, that hurt them early."

"Pursuing one of the great derby upsets, Fremantle were left with an agonising return of 1.9, with three of those behinds rushed.

There were other opportunities they should have swallowed, with the most galling miss coming from Taberner in the first quarter. He hit the post from just 20m out directly in front and the record derby crowd of 58,219 let him know about it.

The teams had 13 inside 50s apiece in the first stanza, and while there are entries and there are entries the quarter-time score line of 5.1 to 0.5 said plenty about how clinical and efficient Eagles went about their work.

West Coast didn’t know it at the time but those five goals would prove priceless by the end of the night, with the Eagles adding just another five majors for the remainder of the match."[2]

"Poor skills almost cost the Dockers against St Kilda in Round 3; they did hurt them in Round 4.

West Coast led by 31-points midway through the third quarter, but the statistics didn’t really show why the margin was so big.

Without Fyfe, West Coast was able to dominate clearances, but inside 50s were pretty even throughout the game. They had their chances.

West Coast recorded their first official WAFL win, defeating Fremantle-affiliated Peel in a curtain-raiser to the Derby. Jake Waterman continued his strong form with another five-goal haul and Matthew Allen had 25 possessions through the midfield.

Retrieved from "https://eaglepedia.fandom.com/wiki/Round_4_2019?oldid=31923"
Community content is available under CC-BY-SA unless otherwise noted.