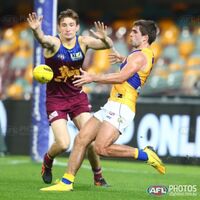 West Coast's horror stay in Queensland continued with a 30-point loss to the Lions at the Gabba. The Eagles were able to stay in the game for a half, but fell away as Brisbane kicked five goals in the third term. Andrew Gaff played a lone hand in the midfield in his 200th game with 30 touches, while Brad Sheppard successfully shut down the dangerous Charlie Cameron.

Brisbane were forced to replace captain Dayne Zorko with former Crow Cam Ellis-Yolmen. The match was played in fine but humid and slippery conditions.

Brisbane got the first scoring opportunity of the game when Cam Rayner took a mark inside 50 but he pushed his set shot slightly wide. Charlie Cameron had an opportunity from a similar spot but his shot went even wider, missing everything. Both sides tried to move the ball down the outer wing to little effect for several minutes before Zac Bailey dumped Duggan in a dangerous tackle inside defensive 50, leading to a minor scuffle. Hugh McCluggage had an opportunity but his kick around the body just missed. The Eagles moved the ball quickly down the wing and Ryan found Gaff inside 50, but his set shot hit the post.

West Coast finally found a clear path to goal when Cripps hit Darling out the back of the Lions' defence, and he kicked the game's first goal. The Eagles locked the ball inside forward 50 with repeat stoppages and eventually Naitanui won a free kick in the ruck, slotting the goal to give his side an 11-point lead. A quick kick out of defence by Yeo was marked by Brandon Starcevich just before the siren, with the young Lion bombing his set shot straight through to cut the margin to five points.

Darling forced a turnover inside forward 50 and found Kelly who centred to Ryan at the top of the square, with the #1 converting to restore the Eagles' 11-point margin. Brisbane scored quickly after the restart, with Jarrod Berry shaking a Hurn tackle and goaling off the outside of his boot. Eric Hipwood had a running shot which narrowly scraped through for a behind. Down the other end, Gaff tried to curl a ball around but it went just the wrong side of the post. Allen won a free kick inside 50 but his set shot went well wide and was eventually rushed over for a behind by the Brisbane defence. Brisbane worked the ball forward and Callum Ah Chee had an opportunity from 50 but it was just wide. Lincoln McCarthy took a big grab inside 50 but sprayed his shot wide, cutting the lead to four points.

The game devolved into an arm wrestle for the rest of the term. West Coast had an opportunity when a miskick across goal by Starcevich trickled through for a behind, with Petruccelle just unable to get a boot on the ball at the line. Brisbane went forward in the dying stages with late inclusion Cam Ellis-Yolmen having a shot out of a stoppage but putting it through for a behind. West Coast tried to quickly move the ball down the wing but made it just halfway before the siren sounded, going into the break four-point leaders.

Brisbane went forward quickly but McCluggage's curling shot hit the post. A controversial free kick was paid against Jetta for a dangerous tackle in front of goal, with Berry converting to give his club the lead. Another free kick was paid to Brisbane inside 50 for deliberate out of bounds, with Cameron slotting the goal as Brander left the ground with a bloodied nose. The Lions charged forward again and Lachie Neale converted a set shot to push the lead out to 15 points.

"We’re disappointed we didn’t win, but I thought effort and intent was there. We had to adjust a few things to the conditions and we were right in it there for long periods of the game, but we got overawed in the midfield, beaten in the contest and the game got away from us halfway through the third. We hung in there and battle, but we’re just not good enough at the moment. It was a grind game and we didn’t do it for long enough.

"...We’ll work through it. It (the midfield)’s not connecting at the moment. We got beaten by a better midfield tonight. It’s not necessarily about the numbers. I think the shortened game and the conditions we’re working in in terms of the environment, the humidity and night games, it’s going to look a bit different. But we lowered our colours across the board in the midfield and we’re not winning contests in front of the ball and we’re not winning contests behind the ball. That’s where we’ll start our work. We’ve got to get our hands dirty with contested possessions. They don’t always paint the exact picture, but at the moment it’s clear they are.

"The Eagles had too many players who struggled to have an impact, but Nic Naitanui stood out like a beacon as he went into beast mode in the ruck.

He won hit-outs to set up teammates, he won clearances when the ball hit the ground and he tried valiantly to lift his team at every opportunity.

At half-time, the ruckman had six of West Coast's 20 clearances which was double his next best teammate. He finished with a game-high nine clearances.

Andrew Gaff won the ball from start to finish in his 200th game just as he had in the previous 199. He had 30 disposals which was 12 more than any other Eagle. Brad Sheppard played a brilliant defensive game on Charlie Cameron, and Ryan kicked three goals but it was to no avail."[2]

"It was a night for defenders: Harris Andrews, playing his 100th game for the Lions, easily accounted for Josh Kennedy, while the Eagles' Will Schofield similarly blanketed Eric Hipwood. Brad Sheppard kept the elusive Charlie Cameron on a tight leash.

But in the third term the Lions lifted, taking the game back from the centre circle. McCluggage, soundly beaten by Andrew Gaff in the first half, began to take control of his wing and was involved in several key plays, while Lyons and Neale kept driving their side forward.

They had some luck: Berry, Cameron and Oscar McInerney all goaled from free kicks, and a hacked kick inside 50 from Mitch Robinson landed squarely on Neale's chest. But they also had all the momentum and drive into attack, and took a 17-point lead into the final break, the biggest lead of the match."[3]

West Coast's reserves played a scratch match against Brisbane on an outdoor oval at Carrara. As with the previous week, several Lions players filled in on the Eagles' side. Suspended Eagle Jeremy McGovern turned out for West Coast but injured an ankle.

Retrieved from "https://eaglepedia.fandom.com/wiki/Round_3_2020?oldid=32686"
Community content is available under CC-BY-SA unless otherwise noted.