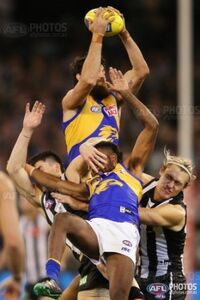 West Coast returned to the MCG to defeat Collingwood in their Grand Final rematch, this time winning more comfortably after seizing control of the game in the second term. The Magpies threatened during the last quarter but the visitors were able to find goals and keep Collingwood at bay to record their second win of the year. Dom Sheed kicked three goals from 24 possessions to continue his strong start to the season, and Andrew Gaff had a game-high 35 possessions on his return from suspension.

"It's a tough effort to come over here and play a team that's in really good form, good healthy list, and To get away with a win - we're really proud of our players, we thought it was a gutsy win tonight.

"...I think the style of Collingwood's changed slightly this year so it's a different thing we've got to deal with. The fact is we've won a few games in a row against the Pies, but every game is different. We didn't look at the Grand Final or the last time we played at all because it's different, and next time we play them it'll be different again. Just really pleased with our players, the resilience they've got at the moment and the confidence - obviously coming off a premiership you'd think there's a bit of inner belief there. (I was) a little bit unsure about where that was at, but tonight we saw it.

"...Petruccelle, and Liam (Ryan), and Oscar Allen are all under 20, or around about that age, and what Liam did tonight was sensational with his pressure. He broke all records within the club, which we're really proud of, because when he got to the club there were probably some parts of the game that he didn't really concentrate on, and to develop in such a short period of time, we're really pleased with his development. He's probably played about 20 games, if that, and it was his second game at the MCG, and I think he played pretty well.

"Jordan De Goey booted two early goals to help the Pies to an 11-point lead at quarter-time, but the Eagles' midfielders were able to get on top at the contest in the second quarter.

Shuey and Gaff led the charge and Cripps gave his side the lead for the first time with his opening goal of the night 15 minutes in.

But Adam Treloar capped two Collingwood counter-punches with a pair of majors to slash the deficit to nine points at half-time."[2]

"A brilliant comeback from Andrew Gaff, a couple of last-quarter highlights from Liam Ryan and a match-sealing goal from none other than premiership hero Dom Sheed took West Coast to their fourth consecutive win over the Magpies.

With three of the Eagles' wins coming at the MCG their dominance over Collingwood is clear as their midfield thrashed the Magpies much vaunted bunch to run out winners 15.8 (98) to Collingwood's 11.10 (76).

It wasn't just a workmanlike win either, with Ryan creating a goal out of nothing for Jack Darling when the Magpies were pressing late in the game before putting the ball in Sheed's hands – in a play reminiscent of last year's Grand Final – after taking another high-flying mark albeit on the defensive arc.

As everyone expected, Sheed was able to use the angle to his advantage to steer the goal home and finish off the Magpies for the final time."[3]

West Coast had a loss in their first-ever game in the WAFL competition as a standalone side, going down to Perth by 46 points at Lathlain Park. The Eagles kept the margin relatively close for most of the match and closed to within 20 points in the last term before the Demons kicked the last four goals of the match to streak away. Jake Waterman kicked five goals for the losers and Brayden Ainsworth was busy with 24 possessions.

Retrieved from "https://eaglepedia.fandom.com/wiki/Round_3_2019?oldid=31922"
Community content is available under CC-BY-SA unless otherwise noted.