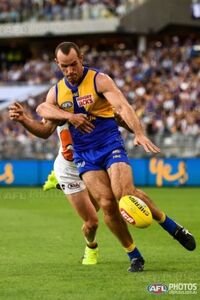 West Coast bounced back from a disappointing season opening with a big win over the Giants. The Eagles controlled play for most of the match, and increased their lead at every change to run out 52-point winners and celebrate the unfurling of their premiership flag, plus milestones for Shannon Hurn (250 games), Chris Masten (200 games) and Josh Kennedy (200 club games). Luke Shuey led the way with 28 possessions and two goals and Jack Darling kicked four.

Both sides went in as named. The match was played in perfect conditions.

"It;s been a big week for the club, with how the club as a whole handled the indigenous element to the start of the week, and the racism. The stand that we made, I'm really proud of that. And even to the point after the game, sharing that stance with the Giants we thought was really important. So that was a big few days, and then obviously the milestones and the occasion of today, and more importantly how we displayed an inconsistent effort last week. So to put a four quarter effort in, albeit we started pretty slow and some of the numbers don't look great, I thought we held momentum after quarter-time.

"...We probably just saw a little bit more consistency across the board with our work rate, so that was really pleasing in the end. I think the way we started was a bit sloppy. Our defenders defended really well tonight. The inside 50s were out of whack a fair bit - minus at least 10 - and they held up really well. That was probably the backline we're used to seeing. It's just not sustainable though to keep doing that every week, so we've got to fix that.

"We had to be efficient, and we were. Throughout the night, each forward sort of had their opportunity, and displayed some of the things we saw in the pre=season. We're still working through the dynamics of our front half, there's still a bit of change with Lecca leaving and Scott Lycett, and obviously Jamie Cripps not being available, and Willie Rioli. So there's been opportunity, and tonight they stood up. Along with our rucks as well, so that was good tonight."

"Whitfield was unstoppable in the first term with 12 disposals, and he continued the onslaught in the second term as the Giants' run-and-stun style looked set to tear the game wide open.

But their inability to make the most of their forward thrusts came back to haunt them as West Coast finished the second quarter with a goal blitz take a 28-point lead into half-time.

GWS entered the long break with the sombre knowledge they had scored just three goals from their 36 inside 50s.

In contrast, West Coast booted eight goals from their 23 entries - an efficiency that proved to be the difference."[2]

"The Eagles’ defence stood tall, intercepting the Giants' forward forays and rebounding up the other end to lead by a goal at quarter time.

The Eagles led by 28 points at half time after a strong second quarter where they kicked six goals to two, including a burst of five in a row to close out the half.

Lewis Jetta utilised his booming right-foot kick at the kick-ins, regularly pumping the ball well into the centre square and helping set up the Eagles’ forward entries."[3]

Retrieved from "https://eaglepedia.fandom.com/wiki/Round_2_2019?oldid=31921"
Community content is available under CC-BY-SA unless otherwise noted.