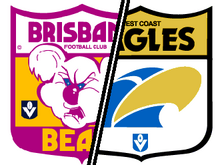 West Coast accounted for the bottom-placed Bears and strengthened their finals position in 1990's penultimate round. Chris Lewis continued his good form with 38 possessions and three goals and David Hart was also a strong contributor with 31 disposals and a goal.

"Rance, who played the first 14 games of the year, was cast aside after the Eagles' 26-point loss to Collingwood in round 14, but has now seemingly guaranteed himself a spot for the finals.

His gritty comeback to bolster the Eagles' backline was perhaps the only positive aspect - the four critical premiership points aside - to come out of the Eagles' eight-hour journey on Saturday via Adelaide and Sydney.

The 7286 spectactors at the game had to endure a blustery wind, an inept performance from the home team and some of the most difficult-to-follow umpiring of the year.

Certainly, there was nothing to inspire West Coast confidence with the finals two weeks away."[1]

Retrieved from "https://eaglepedia.fandom.com/wiki/Round_21_1990?oldid=31748"
Community content is available under CC-BY-SA unless otherwise noted.