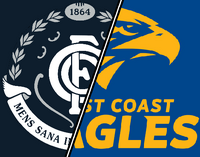 West Coast had a relatively easy win over Carlton in Melbourne, breaking the game open with a seven-goal second quarter but gave up the chance to boost their percentage after easing off in the final term. Liam Ryan kicked a career-high four goals and Luke Shuey kicked two from his 28 possessions.

Carlton replaced Dale Thomas with debutant Angus Schumacher, while the Eagles went as named. The game was played under the closed Docklands roof.

"It was a good win, yep. Really pleased. We knew what Carlton were all about. (They've won) five out of the last seven games, their brand is pretty obvious, so we’re very happy to get away with the win.

"I thought the contest, around the stoppages, we were really struggling. It was a battle for most of the night. But when we got supply we looked pretty dangerous in the front half. Our tall backs, at stages, had good influence on the game and when we got some supply I thought our high half forwards looked pretty quick tonight. We were pretty efficient in front of goals.

"...We weren’t great today at stoppages, we got touched up. So last week, or the week before, we’ve had good days. We’re scoring from stoppages really well, for me it’s really hard to say let’s just fix this one part because next week it’ll be good. We’re just trying to play total footy I suppose, but that doesn’t happen. So we’ll look at that, it’s one of Carlton’s real strengths. It was probably the biggest issue we had for most of the day – how do we stop the clearance domination and metres from clearances. We had pretty good metres from turnovers, but that might change next week so I won’t over analyse it."[2]

They led mid-way through the second quarter after a spell of midfield dominance, led by Sam Walsh on a quiet day for Cripps.

Then, in the blink of an eye, West Coast took the contest away.

Three goals in three minutes saw the Eagles regain the lead and three more in time-on turned a seesawing contest into a comfortable afternoon."[3]

But the Eagles kept pressing, pressuring and, when they could, pummelling the young Blues while Ryan pulled in a contender for both best mark and bravest mark of the year running back into the pack for a courageous grab.

The Eagles had a 20-point lead at half time. Moments into the third term the Jake Waterman kicked truly from point-blank range and Ryan kicked his snap goal and another soon after, doubling their 20-point lead and the premiership points looked to be decided.

As good as the Eagles were, the Blues kept pushing their case as small forwards like Michael Gibbons (three goals) and Newman (four goals) cutting the lead to 24 points when it could have blown out further."[4]

West Coast's finals hopes all but evaporated with a loss to bottom-placed Swan Districts at a wet Bassendean Oval. The Eagles, down to two fit men on the bench after losing Liam Duggan and Jarrod Brander to leg injuries, fought back from 26 points down at half-time to take the lead but Swans were able to find one last goal and then lock the contest down. Matthew Allen had a team-high 25 touches and kicked an important last-quarter goal and fellow midfielder Hamish Brayshaw tallied 23 possessions.

Retrieved from "https://eaglepedia.fandom.com/wiki/Round_20_2019?oldid=31939"
Community content is available under CC-BY-SA unless otherwise noted.