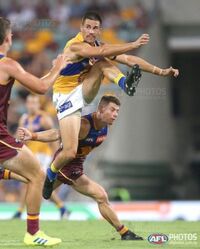 West Coast were stunned by Brisbane in a rocky opening to the side's premiership defence. The visitors looked to be cruising when they led by 27 points at the first change, but added only one goal in the following term and were held scoreless in the third as the Lions ramped up the pressure to a level West Coast were unable to match. Dom Sheed had a career-high 38 possessions and Oscar Allen kicked two first-term goals.

Both sides went in as named. The game was played in warm conditions, with humidity making the surface slippery.

"I thought Brisbane were sensational in the way they went about it. Even in the first quarter there were opportunities that they missed, so it's unfair to even say that. We had a good period of ten minutes in the first quarter. The start of the second, a couple of goals out of the middle and then I just thought we got beaten around the ball for most of the night. The numbers will tell you we well and truly did, but when it mattered we didn't compete well enough. And then the last ten minutes we lost it, which is probably one of the more disappointing parts of the night.

"...There's always positives. We'll look at the positives as much as we look at the negatives, but we're not going to stick our heads in the sand. We're not going to just park it and move on. There's opportunity for kids to come through and play some footy together. They've been doing that all pre-season, so the excuse of "they haven't played together too much" - they've played together enough. So once again, the kids have got opportunities, that's great, but it was the midfield, and a little bit of our backline, that didn't perform at their best today.

"...We got beaten at stoppages. Metres gained from stoppages, and turnovers. It was really slippery, especially in the second quarter, and we didn't handle the conditions as well as Brisbane. It wasn't a night for pretty football and when it really mattered, we didn't stand up."

"The Eagles booted six unanswered goals in the first term after an opener by Lions small forward Cameron.

But Chris Fagan's team responded wonderfully after the break to kick seven-goals-to-one to turn the game on its head.

Delighted Lions' fans gave their team a standing ovation at halftime as they held a seven-point lead, with brilliance by Cameron the highlight.

Playing his first AFL match since tearing the lisfranc ligament in his right ankle last June, Cameron got the better of Eagles defender Tom Cole on the edge of the goal square before he batted the ball into the air with his hand and hooked the ball in mid-air over his shoulder for a goal."[2]

"Neale went to half-time with 20 possessions, with only Dom Sheed finding more of the ball for the Eagles. By the third quarter, Brad Sheppard had been moved onto Cameron, and while he managed to quieten him down, the Lions dug in harder.

They’d assumed total control around the clearances, tackling hard and pinning the ball in attack. The Eagles began to look as though they were swimming through soup, with the humidity at close to 80 per cent. Missing a couple of opportunities didn’t deter the Lions, either. They just went harder—and eventually the wall broke.

McCarthy kicked his third from a long bomb, then Hipwood broke a crucial tackle to help set up Ryan Bastinac. McCluggage, growing more important with each touch, hit Cameron Rayner for the gun forward’s first. It left the Lions 29 points to the good at the last change, with the Eagles held scoreless.

Luke Hodge, playing on pure guile in what will be his last year, managed to run down Jake Waterman in a tackle close to the visitors’ goal early in the last quarter, the crowd hooting its approval. McCarthy’s fourth was enough to seal the match, late goals by Daniel Rich and Rayner adding some cream."[3]

Retrieved from "https://eaglepedia.fandom.com/wiki/Round_1_2019?oldid=31920"
Community content is available under CC-BY-SA unless otherwise noted.