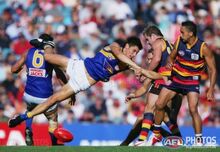 On a sunny Easter Sunday, West Coast came from behind to beat the Crows in Adelaide for the first time since 1996. Both sides struggled to shake off the pre-season rust, but Adelaide led for most of the match before a couple of final-quarter goals from Andrew Embley and one from Ashley Hansen turned the match for the Eagles. Embley had 21 touches to go with his three goals, and Daniel Kerr and Ben Cousins also had plenty of the ball.

"At the long break, the Eagles had scored three goals from 27 trips inside 50m.

The Crows were not much better with five goals from 22 trips, but they led by 15 points.

It was not a great spectacle and it was not helped when three of the most talented players in the game - Mark Ricciuto, Andrew McLeod and Chris Judd - were ruthlessly tagged out of the contest.

Stenglein kept McLeod to five touches to half-time, Drew Banfield kept Ricciuto to just six while Robert Shirley again did the job on Judd, restricting him to just six ineffective possessions, four of which were received handballs."[1]

"Worsfold's move to shift Rowan (sic: Brett) Jones on to Welsh after he started well was crucial, as the Adelaide forward added only one behind. Without him in the scoring picture, the Crows had few successful options.

The inability to kick goals was also largely due to the outstanding effort in defence by David Wirrpunda. Tyson Edwards battled hard for Adelaide without dominating, while Graham Johncock - and Burton until injured - did well.

Ultimately, it was Andrew Embley who saved the day for the Eagles with some brilliant goalkicking. He finished with three, and steadied the crew under pressure.

The Crows looked good early when they kicked long and played direct, but sadly were not allowed to sustain that style. From then on, it became a scramble, and the skills were thrown out of the game."[2]

In the lead-up to the round the following players were listed as injured:

Retrieved from "https://eaglepedia.fandom.com/wiki/Round_1_2005?oldid=32525"
Community content is available under CC-BY-SA unless otherwise noted.