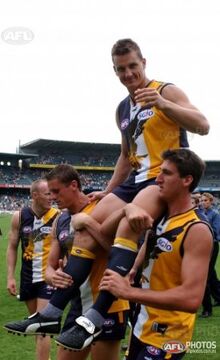 West Coast got the season away to a strong start, blowing a close game wide open in the third quarter in kicking seven goals while holding Port scoreless to ensure that Glen Jakovich's 250th game and the farewell of the recently-retired Peter Matera was remembered for the right reasons. Michael Gardiner dominated his Port opponents, while midfielders Ben Cousins and Chris Judd were prominent as always. The game was also memorable for Chad Morrison who, on his 25th birthday, returned to the senior side after two knee reconstructions and a season and a half on the sidelines.

Players in the WAFL[]