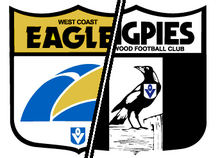 West Coast got the reign of Mick Malthouse off to a successful start with a big win over the Pies. Peter Sumich kicked six goals and Paul Peos had 25 possessions.

"The Eagles led from the second minute and increased the lead throughout the day.

In Peter Sumich, who finished with six goals and had the upper hand on Dennis Banks throughout, thanks to some precision delivery, the Eagles may have found a more reliable way to goal.

Karl Langdon played with more level-headedness (apart from a few silly infringements) but he was no less exuberant and will prove a handful for many backmen.

At the other end of the ground, Brian Taylor got none of the sort of support that came Sumich's way and he could not shrug off the close checking of Michael Brennan, who contributed much to Matthews' proper assessment that Collingwood was simply unable to score goals."[1]

"The Eagles never appeared in danger and the ever aggressive Karl Langdon produced one of his finest displays.

While aggression has always been a feature of his play, it was not used recklessly yesterday but aimed successfully at winning possession of the ball.

Collingwood had few contributors although veteran Shane Morwood was again effective at centre-half-back and Paul Tuddenham provided a focal point in attack."[2]

Retrieved from "https://eaglepedia.fandom.com/wiki/Round_1_1990?oldid=31684"
Community content is available under CC-BY-SA unless otherwise noted.